The lines above are extracted from Willem Boshoff’s 2004 text piece written in excrement Cacoethes Scribendi (included in the exhibition ‘Non-plussed’ at the Goodman Gallery) and form part of an extensive inventory of mostly contradictory things which Boshoff ‘has a big problem with’. For instance, Allah, God, Yahweh, the Pope, Jesus Christ and ‘traditional leaders’ all crack a nod at different times. Through listing a series of confrontational statements, the piece comes across as an obvious precursor to the controversial Racist in South Africa; currently raising ire as part of the South African national pavilion at this year’s Venice Biennale. Both are seemingly contentious text pieces which list a series of grievances, but with a few fundamental differences.

At his best, Willem Boshoff uses the formal and conceptual traits of his works in tandem to play into a space of uncertainty wherein they are understood on multiple levels. In fact, this space of uncertainty has been a vital part of how Boshoff’s work has been understood in the past. For example, it is one of the central linking concepts in Ivan Vladislavic’s excellent 2005 Taxi monograph on Boshoff, locating it in the tension between the ‘verbal and the visual.’ Further support can be seen in Carrol Clarkson’s suggestion that ‘The uncertain play between what is seen and what is understood in each encounter with a Boshoff piece seems to re-enact a primal awareness of inchoative meaning surfacing in tactile matter.’

The artist’s oeuvre is strewn with examples of text pieces where the formal content works in tandem with the language to convey a multitude of sentiments. In Cacoethes scribendi, there is a space of uncertainty as to who the narrator of the work is. On the one hand, the confrontational line of fire is exceptionally broad and contradictory, preventing a specific subject position from being attached to the work. On the other hand, this narrator could obviously be Boshoff, implying a full armoury of axes to grind. By inscribing the text with manure from chickens, cattle and sheep, Boshoff takes a self-critical look at the urge to fling grievances and blame like faeces. The title of the work refers to ‘an insatiable desire to write’ but also to ‘bad habits which cannot be corrected,’ and in a medical sense, ‘malignant disease.’ Through a combination of the work’s title, its materials and its content, the insatiable desire to shovel one’s discontent is examined in an open and contestable space of political discussion.

One of the central issues with Racist in South Africa is that it actively resists this space of uncertainty. Most primary accounts of the piece express dismay both at the seemingly disengaged politics of the work and that its form overruled any suggestion that it may be intended to parody the views expressed (for examples see Linda Stupart, Chris Thurman and Pierre de Vos’s reflections).

Usually referred to as a Conceptual artist in biographies, Boshoff’s work emphasises language and text in place of visual imagery. In Racist in South Africa, it is the unadorned starkness of the text which results in the viewer’s (understandably) uncomfortable relationship to the sentiments expressed. Formally, this links to Conceptual artists such as Joseph Kosuth, John Baldessari and Lawrence Weiner who – in the 1960s- viewed the use of language/text to be the key to freeing art totally from the confines of illusionism. Simplifying in the extreme, the idea was that if typography was sufficiently banal, the text component would fall away and the work could exist as ‘pure information.’ Kosuth referred to it as ‘using language to bypass language.’

Taking the form of black text digitally etched on an anodised aluminium panel, this is precisely what has happened with Racist in South Africa. The work asks to be taken literally because there is nothing within its formal qualities to suggest subtext. As such, it steadfastly avoids both the contradictory heterogeneity of Cacoethes scribendi and its self-awareness. In Barthesian terms, Cacoethes scribendi is an example of a writerly text, floating and unstable, awaiting the projected subjectivity of the viewer to complete the work. Racist in South Africa constitutes a readerly text in the sense that everything from the way the work is presented to the prescription of a specific (disgruntled white) voice to the typography itself resists anything beyond literal interpretation.

Obviously I am not suggesting that Boshoff’s subjectivity should be denied a voice, nor am I demanding that art be overtly pluralistic. The point is just that single-perspective political commentary which over-simplifies and generalises the circumstances which it critiques is unhelpful. I’m sure that most critics of Racist in South Africa would agree that the current government is a frequently devastating force and that the country’s rape and crime statistics are horrifying. However, racialising grievances with the ruling party enacts the same reductivist logic as the ‘race card’ which the work aims to contest. ‘I know you are but what am I’ is a fruitless, cyclical game.

Ultimately, it’s impossible to shake off the impression that Racist in South Africa was a filler work destined to be side-lined had it not suddenly found itself included in the South African national pavilion and bestowed with unforeseen limelight. The fact that it had previously snuck through two prior exhibitions in South Africa (Goodman, 2011 and Smac gallery 2012) relatively unnoticed supports this. Clearly then, the work’s role as representing South Africa’s art world on an international platform is a substantial contributing factor to the offence it has garnered. In this respect, the curators (Christopher Till and Jeremy Rose) should really be held more accountable for the decision to include it. This of course puts all involved in the uncomfortable position of either retracting or standing by the work.

This leads us to an epilogue of sorts, wherein Boshoff goes with the latter option. Hot on the heels of the Venice outcry, Racist in South Africa was exhibited at Hazard gallery in Johannesburg as part of a group exhibition entitled ‘Protest’ alongside artists such as Gerald Machona, Kudzanai Chiurai and  Laura Windvogel (Lady Skollie). The work’s inclusion was accompanied by a published scrapbook of the responses and critiques which it has generated. Extending the approach of viewing the work through the lens of Conceptualism, this latest incarnation is in fact, perhaps unintentionally, a marked improvement from the work on exhibition in Venice. 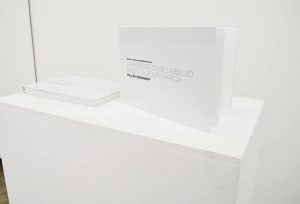 By recontextualising the work into print, Boshoff follows the examples of Conceptualists such as Dan Graham (and Kosuth and Weiner) who became profoundly interested in publishing art designed to be read as preferable to exhibiting in galleries. Formally it serves the piece far better than its aluminium panel version. By incorporating the critiques, the content of this incarnation becomes a more fleshed-out consideration of the idea of racism in contemporary South Africa (although there are issues of consent in that it is not clear if any of the authors of the main entries were consulted for inclusion).

Whatever your view of the work was previously —admiration or despair— it will most likely be entirely reinforced by the publication. But at least the book introduces a plurality of voices and viewpoints into a (often heart-breaking) discussion. If nothing else, it transforms a conservative rant into a scathing portrait of the dismal state of street level racial awareness in South Africa.  I would suggest that a copy be sent to Venice as well. In terms of examining the ‘past as an alluvial undertow in South Africa’s fractured and multivocal present,’ the scrapbook is far more effective (and damning) than the text piece could ever be.

A feature by Siya Masuku

A Painter of Real Life: On the work of Durant Sihlali

A review by M Thesen Law