A review by Lloyd Pollak on the 14th of October 2015. This should take you 4 minutes to read.

‘Infinite Loop’ is a whopper of a solo. Seventy works are on exhibition at SMAC’s survey of eight years of Gottgens’ career. Although there are numerous examples of her previous oeuvre, the exhibition concentrates on two bodies of work Ghost Album (2010) and Infinite Loop (2015) which have never before been seen by the public.

Ever since her debut, the artist has cast a cold eye on the South African dream of the perfect family and the perfect home. She took happy snaps steeped in the optimism of affluent 60’s suburbia, and turned them into edgy painterly evocations of ‘the ennui and malaise beneath the surface of everyday life.’ The sense of a serial killer lurking behind the hedge, or a green mamba in the rockery, yields in her mature work to a subtler, more nuanced preoccupation with memory, mortality, death and decay, and reveals an innovator of immense technical address.

As you ascend the stairs of SMAC’s Stellenbosch Gallery, you suddenly turn a corner, and glimpse The Field of the Cloth of Gold.  The freshly cracked egg yellows, honeys and rutilant golds are so lovely that the palette alone causes your heart to miss a beat.  No wonder Gottgens is the only South African to feature in Thames and Hudson’s ‘100 Painters of Tomorrow,’ a publication that establishes her as an innovator of international significance.

One imprimatur is the ruthless audacity with which Gottgens uses blur to eliminate detail.  The particularities of setting, costume and expression dissolve into pigment. The sketchiness is deliberate, for Gottgens continually interrogates representation, the mechanics of image making, and the interplay between feeling and the fragmentary visual recollections that drift through the mind.  She seeks the archetypal and discards specificity so that the viewer sees herself in the painting, rather than the nominal subject.  Working with extreme freedom she often divides her canvases into figuration and areas of pure, or almost pure, abstraction. At the base of the Field of the Cloth of Gold, representation dissolves into bewitching virtuoso brushwork in golds, oranges, russets, ambers and trails of gray.

Gottgens’ consummate tour de force is the trio Field of the Cloth of Gold, Milk Teeth and Oh Green World – rhapsodic celebrations of the innocence of youth, and plangent laments for its inevitable loss. Inspired by Gottgens’ childhood memories, these paintings transport us back to the decorous proprieties of white South Africa.

Each painting consists of a radiant sunlit glade where a ring of young girls insouciantly play. However the brazen lights playing on the silhouetted trees, the encroaching shadows, dark branches, and sinister profiles permeate the atmosphere with a sense of indefinable menace that intimates that this charmed world is doomed. Patches of colour erect barriers between the girls, and convey the sense of inner loneliness that dogged Gottgens during her sad childhood.

The metaphor of the infinite loop is omnipresent: the round formations the girls adopt resemble clock faces; the figures, digits; and the circular compositions suggest both the intimacy of these girlish friendships, the finality of the cycles of life and the irretrievability of the past.

Gottgens recontextualises anonymous photographs dating from about 1900 to 1970. The more ancient the source material, the more the prints have faded or changed colour, and she ‘exploits the spoilage to underline the gap between now and then.’

Frequently neither the sitters, nor the occasion, are identified.  Although Gottgens creates her own imaginative variations on the photographs, it is still often impossible to identify the subject matter which remains purely conjectural.  There is never a narrative.  Never a hint of what happened before, or afterwards, so that multiple exegetical possibilities replace any unilateral reading. 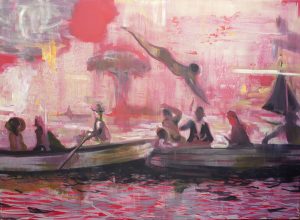 Gottgens’ inimitable lyrical flair and intuitive grasp of emotive colour, expressive shape and festering shadow are apparent in Sea Ablaze where the entire canvas ignites in a conflagration of fiery reds, yellows and pinks. A nuclear cloud looms over the horizon.  Despite the apocalyptic overtones, the original photograph depicted a festive scene of Edwardian men and women taking their ease as they row, yacht, dive and swim.  Confronted with this baffling spectacle, the viewer craves additional information. None is forthcoming, and consequently the mystery becomes insoluble, and the image indelible.

Brooding spectral chimera and phantasmal visions in misty half-tones constitute another Gottgens’ forte. She rescues ghostly presences from oblivion, and resurrects forgotten events in strange, mirage-like paintings. In Zeitgeist a group of men in formal Edwardian suits and hats solemnly stand to attention as they hearken to a brass band.  The site dissolves into darkness – neither day, dusk, nor night.  Quite what is happening we do not know, but there is an undeniable sense of consequence and moment. Gottgens renders the brass instruments in cold silvers and her naturalistically inexplicable orange and blue palette remove the painting from any ordinary context, and project it into the extraordinary.   The whole ethos of Empire, heroism and the supreme sacrifice is reconstructed with an irony that proves unbearably poignant as the ideology that sustained it is totally discredited.

Gottgens probes deep into the universal fears, doubts, and anxieties and as a result my identification with her work is absolute. Her idiom seems far more relevant than that of aging senior artists like Kentridge and Deborah Bell which appears tired, formulaic, and out of touch with contemporary sensibilities in comparison with Kate’s intoxicating newness. 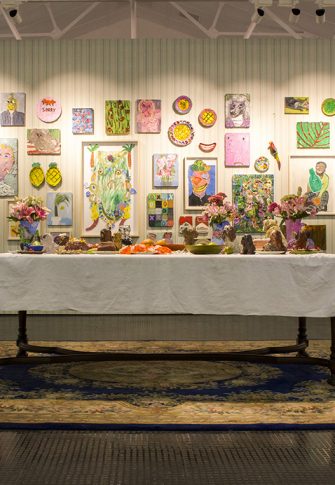 The Queen of Titivation and Prink: Georgina Gratrix’s ‘Puppy Love’ 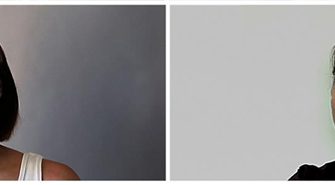 There’s something I must tell you 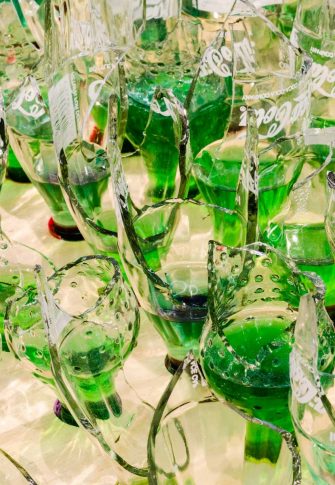 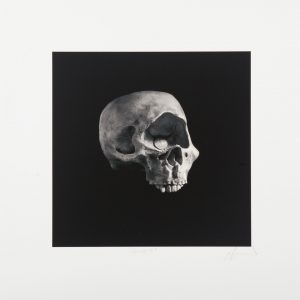