A review by Nicola Kritzinger on the 3rd of May 2017. This should take you 4 minutes to read.

Rebecca Haysom perceives the world in complex, multifaceted and ever-shifting ways. The Tiger’s Bride, her first solo exhibition, is an intimate show of narrative collages revealing a depth of historical and literary knowledge, and a tendency to see a twisted humour in the human condition. The images are a kind of feminist visual rewriting of fairy tales, with pictures hacked out of magazines and books undergoing a violent process of deconstruction and reconstruction.

There’s hilarity in the work, but also a deep sense of unease and horror. In her collages she creates a mise en scène, a highly constructed performance where she sets the stage and directs the protagonists’ bodies into position. The images are sexualized and make use of obfuscation and double entendre. Yet, she inserts reality into her rewritten fairy tales, simultaneously critiquing ideas of romantic love in a work like Searching for Prince Charming or The Tiger’s Bride.

The violence is part of the oxymoronic tradition of subversion inherent in the medium. Collage as a medium drums up the absurdity and violence of Dada, and Duchamp’s readymades. I am reminded of Richard Hamilton’s cultural critique collages, or the chaos of the punk movement’s aesthetic. She portrays the violence of externals acting upon the female body, considers misplaced ideas of romance and overtly sexualized content in the contemporary moment. Collage automatically, because of its historical place, assumes the realm of the critical and the exploratory, the questioning of the world and quotidian norms. It also enables absurdity and a reimagining of what manifests around us. Composed from available media, from magazines that sell particular types of women, ideals or sexual and romantic fantasies, Haysom’s collages engage with the way the female body and its cultural place is portrayed in society. 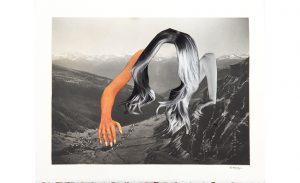 Thought processes, biases and prejudices start with spaces like children’s stories, they are recounted, absorbed and reinforced to engaged children and adults. Fairy tales have, in many ways, reflected certain modes of thought, reiterated them, and reinforced stereotypes. In a recent video, a mother and daughter systematically take apart a collection of children’s books, removing gender biased books, eventually leaving very little on the shelves. Haysom grew up exposed to many books and showed a very early interest in drawing. In an interview she discusses her complexities and experience. In a work like The Enchanted Skirt, she inserts women into the narrative as far more complex and sexual characters than historically present in literature. Her protagonists seem to have more agency than women in historical narratives.

This is a dominant theme throughout the exhibition, she engages deeply with the role of the women in literature and culture over time. Haysom explores cultural mythologies, including a nod to witchcraft and paganism, and their relation to the historical persecution and dismemberment of the female body. Works, like Untitled (Blondie with Horses), deal with the dismembered and reconstructed woman (with her pieces taken from similarly constructed images). Removing and isolating elements of prescriptive societal ideals, Haysom breaks down the image of the woman into parts, and brings to the fore a critical look at the way women are often valued for their parts, instead of their whole, problematic and violent in itself. In works like Totem Puss I and II, she displays the mangled hybrid body parts of cat, man, and woman. She creates hilarious, yet terrifying, chimeras on pedestals with stage lighting.

The women in the collages are amorphous experiments, the malformed, the Frankenstein’s monster, nightmares and terrors. Her figures are often demonic. Haysom’s work invokes voodoo practices, and the horror of a body in parts, a disgust for attempts to control or own the body parts of others. It calls to mind the idea of the cyborg, a woman (re)constructed from pieces, the existential and philosophical grappling of ideas around the concept of the ghost in the shell.

Her reference to Don Quixote in Self Portrait with Don Quixote, where a woman rides side saddle holding a massive pair of scissors next to a portrait of a man on a horse, is a theme that applies throughout the exhibit. Haysom’s world is one where the hero is not desired, where agency and independence is valued over the presence of a false savior. Don Quixote lives in a world of outlandish fantasy and causes disproportionate suffering of others. She inverts this and challenges the ideas embodied in archaic gendered stereotypes: Fuck chivalry, it removes the agency of others.

In a way, her mission itself seems Quixotic, an unattainable goal attempted, with good intentions, by interfering with existing narratives. Collage is a great medium for this interference, presenting a distorted reality viewed through a blurry lens, or kaleidoscope that presents alternate possibilities, interventions on reality.

No Heroes Outside: Broomberg & Chanarin’s ‘Bandage the knife not the wound’ 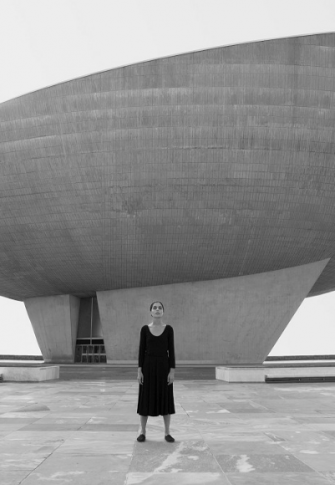