A review by Isabella Kuijers on the 25th of May 2017. This should take you 3 minutes to read.

Most are small in scale, but four large densely-forested works add gravity to the spread. One, Studio Reference XXVIII, depicts a hazy jungle, dank with fantastical mist. Another, Incomplete (forest) XVI, is so violently streaked with black that, like an absurd trellidor, it jams shut in front of the viewer. 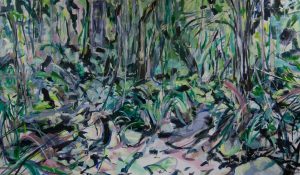 The full collection of these sketches represents a cross section of studio activity, a slice through Hoogervorst’s process, showing works in different states of undress. In the space of an afternoon this show elucidates hours of applying undercoats, scumbling forms and adding swatches of opaque colour. Individual works are titled according to their relevance to the studio system, not yet named and thereby not yet symbolically packaged for the world outside the studio. The title of the show as a whole is especially appropriate to a process-centric body of work as the term Eudaimonia relates to human activity rather than output.

The concept dates to The Nicomachean Ethics, a text written by the Greek philosopher Aristotle in the 4th century BC, which is about the way Aristotle believed humans ought to live. In his book, The Most Human Human, Brian Christian explains that ‘In life there are means and ends: we do x so that y. But most “ends” are just themselves, means to other ends. There is one end, only one, Aristotle says, which doesn’t give way to some other end behind it.’ This end Aristotle calls Eudaimonia. Etymologically it is Ancient Greek for ‘wellness of spirit’ but it has been widely translated as ‘happiness,’ ‘success’ and ‘flourishing’ (which is why, technically, Hoogervorst’s title is missing a preposition). 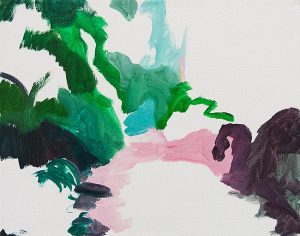 Christian defends ‘flourishing’ as the ideal definition for the term, arguing that ‘[flourishing] doesn’t allow for the superficially hedonistic or passive pleasures that can sometimes sneak in under the umbrella of “happiness” nor the superficially competitive and potentially cutthroat aspects of “success”.’ In terms of artistic practice, Eudaimonia suggests an intrinsic motivation for producing art. Not so much l’art pour l’art but rather art for the act of making art.

The translation ‘flourishing’ conjures a rich mental ecosystem of growth and ripening. But its homonym, meaning to flaunt, brandish or display, describes another aspect of this show: It’s inability to be absolutely autotelic. Accepting that ‘Searching Eudaimonia’ is a byproduct of a personal, philosophical enquiry, there are competing aesthetic considerations which, at times, verge on self-consciousness.

Studio Reference XIII is a scrubby melange with ‘fuck up’ graffitied over it. To observe it is to mentally pronounce the words in the register of their writing; with all the awkward rashness of saying ‘fuck’ for the first time. In a pervasively pretty show, this crudeness reads as an unconvincing attempt at edginess. Studio Reference XXIV and XII are simply jauntily positioned photographs affixed to linen. These, and a handful of other underwhelming, unresolved works are justified by the show’s non finito aesthetic. They are pre-art objects, like clean paintbrushes and un-squelched tubes of oil paint, a benign component of the studio. 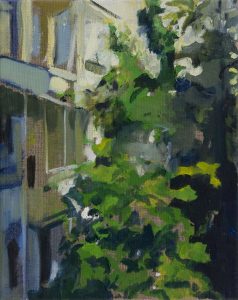 As a painter, Hoogervorst has been straighter-laced and more traditional than he is here, as we are reminded in his compelling rendering of light breaking onto a thin cotton curtain in Studio Reference XIX. His impressionistic window scene instantly evinces quiet coffee-drinking at daybreak. In Vic Bay Parking Lot he achieves a Luc-Tuymans-esque calm and in other, more subdued compositions, such as Studio Reference XXIII, he achieves a sense of denouement through abstraction.

Some of the sparsest, most-restrained canvases feel more finished than works densely populated with marks. It’s a mixed bag that succeeds because of it’s display of the breadth of Hoogervorst’s practice. ‘Searching Eudaimonia,’ with its philosophical basis for play and delightful medium specificity, is refreshingly unconcerned with being Post-something, and despite it’s moments of affectedness it occasionally lifts-off in effortless moments of flourishing.
[calltoaction] 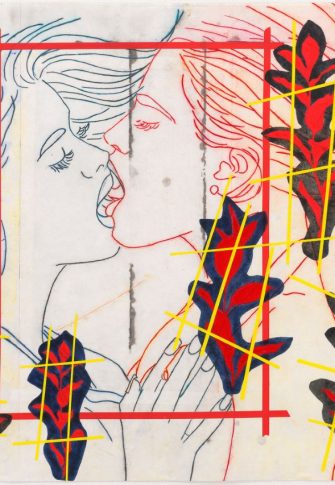 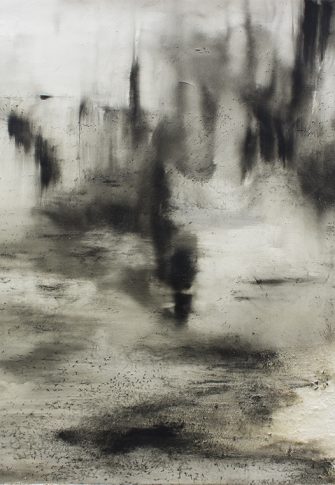 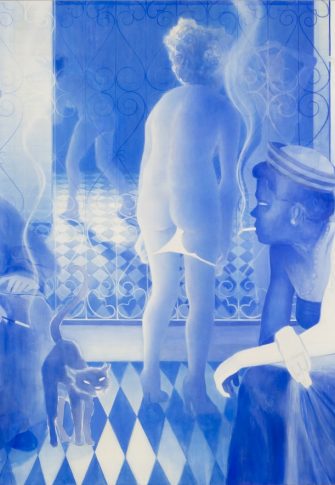 Smoke Gets In Your Eyes: Lisa Brice at Tate Britain 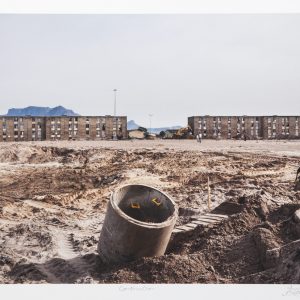