A review by Annemi Conradie on the 26th of March 2019. This should take you 4 minutes to read.

Robert Slingsby’s In/Dependence, at Circa Johannesburg, offers a continued expression of the artist’s enduring fascination with indigenous, rural Africans, in this instance the Karo and Mursi people. For these inhabitants of the Omo River Valley, formal independence has not meant an end to disenfranchisement. The hydroelectric and mass irrigation projects of the Ethiopian government and its Italian and Chinese allies, have hi-jacked the river that sustains all who live in this UNESCO World Heritage site. The catastrophic effects of these developments include drought, displacement, dwindling resources and political instability that affect over half a million rural people.

One consequence of the environmental degradation is the increasing dependence of people like the Mursi and Karo on tourism, or rather, the clamour for photos of decorated bodies as evidence of authentic, tribalist Africa. Unlike smash-and-grab photo-takers, Slingsby has over 15 years established connections among the inhabitants and has been at pains to depict individuals in manner that might earn Alan Sekula’s term ‘honorific portraiture’.  Nevertheless, despite the artist’s sincere intentions, the socio-political concerns underscoring his visually seductive charcoal and pastel portraits don’t necessarily manifest beyond catalogue essays. In casual resemblance, the works too easily slip into the genres of tribal- or militia-glamour so popular with décor stores and NGOs.

In/Dependence, Slingsby’s ambitious foray into photography and installation, fares much better. Quotes by author-activist Arundhati Roy link individual portraits like a chain and introduce unequivocal criticism of neo-colonial exploitation. Full-length photographs of young men in front of graffitied walls or classroom blackboards open scope for the contemporary expression of people identifying as Karo or Mursi.  One can easily imagine the young Messi fan exchanging an Adidas shirt for a blanket and staff, when- or whatever the context (or client) demands. 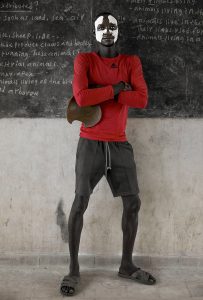 The schoolroom portraits are welcome rents in the tenuous, but lucrative, myths about ‘ancient’ peoples, spun and patched by nostalgics who misrecognise flux as cultural death. In rural Africa as anywhere else, change means experimentation, double-ness, appropriation, and consequently, new traditions.  The lip-stretching tradition of the Mursi, for example, is a result of this flux, while shifting in contemporary usage too.

The lip plate occupies a fraught position in postcolonial Ethiopia where the government has tried to eradicate the practice, deeming it uncivilised. While it’s a prominent marker of their cultural specificity, Mursi people also recognise that outsiders associate lip-stretching with backwardness and that such perspectives may exclude them from the advantages of the modern state. Lip plates might earn women some tourist pennies, but it also obstructs their access to education and employment.

The Lip Plate Cabinet at the centre of the gallery holds rows of the hand-shaped, painted disks that some Mursi women wear in their stretched, lower lips. The plates are Slingsby’s own collection and are laid out in a glass and concrete vitrine stretching almost nine meters from a mausoleum-like cabinet. This dramatic entombment holds potential as a critique of museological and market translations of the indexes of living customs into collectible art, a hot topic in debates about the repatriation of African material culture.

Over-looking the cabinet hangs an enormous, composite portrait that firmly anchors cultural practice and groupness in the land and agriculture. Across eleven scroll-like photos each 250cm tall, adults and children have been arranged into an intimidating chorus of gazes ranging from quizzical to bemused and disinterested.  Regrettably the crammed gallery does not allow one to step back to better contemplate the monumental installation.

The portraits capture various sartorial interpretations of customary dress, but it doesn’t stand as a record of traditional attire. Instead, it offers a record of newly invented traditions. This is evidenced in the burlesque tribalism of a handful of Slingsby’s models: men and women in ‘traditional’ attire augmented with foliage, shells, feathers, cows’ horns, bells and whistles. 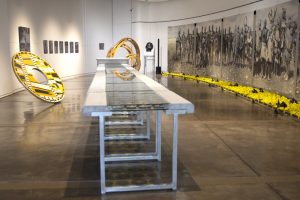 These outfits are examples of the “fancy dress parade” that many locals put on to earn “photo  money.” Pictures of the spectacles recirculate in tourist blogs and aid campaigns, and a quick Google search of Mursi culture reveals that this burlesque tribalism now largely constitutes their image. In future, these images might well become benchmarks of tradition for new generations of photo-journalists and ethnic nationalists. Whether or not these costumes are authentic, is less relevant than the proficiency of the Mursi, Karo and their neighbours at staging authenticity.

Regrettably, the postproduction of this impressive portrait detracts from its capacity to carry the urgency of Slingsby’s cause. The soft greys, copper tones and selective colouring washes everything with nostalgia, as if the persons are already of a bygone, mourned era.  Photographs of Africans as contemporary ‘ancients’ have been trending since the invention of the medium in the heyday of colonialism, and have certainly not served in Africa’s interest. Depending on colonial tropes to critique neo-colonial abuses is a strategy out of pace with the Africa of hashtag revolutions. Since the late twentieth century, image-makers have embraced self-reflexive methods and collaborative practices that share the power to represent. For privileged outsiders to share their cameras, brushes and gallery spaces will be challenging, even more so when the results include indigenous perspectives of camera-wielding visitors. 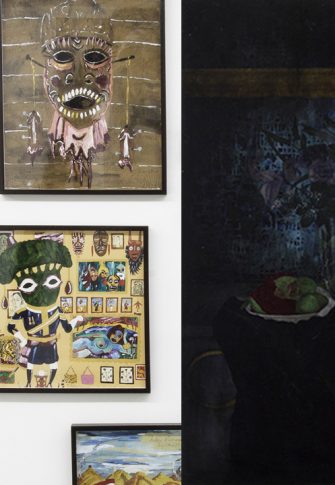 Of Silver and Savages: Cinga Samson and Andrew Gilbert at Blank Projects 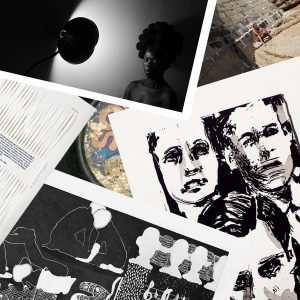