A review by Keely Shinners on the 16th of April 2020. This should take you 7 minutes to read.

The gymnast stands still. Her forearms crossed over her face. Perhaps she’s building up strength before the big moment. Potential energy preceding kinetic energy. Or maybe she’s just taking a second to herself before she goes out into the world of crowds and cameras. As spectators, we wait in anticipation for the moment when her arms move away, a smile bursts from her face, and she performs a corporeal magic trick we couldn’t hope to recreate in our wildest daydreams. But the gymnast refuses to be seen, and the video cuts away. Here is another gymnast, about to run out onto the tumbling mat. She sighs, takes a step forward, and – the video cuts away again. What follows is a recording of the moments just before glory, where subtle, unthought movements take over: praying, sighing, lip-biting, heart-pounding. The gymnast is not performing for us yet. Or, if she is, she is performing only for herself, trying to calm her nerves. And she has a right to be nervous. Not only is she being scored on a minute-decimal system from her bright smile to her pointed toes – historically, by an all-white panel – she is about to endeavor moves that could fracture her bones, tear her muscles, break her neck. All in a bedazzled leotard. 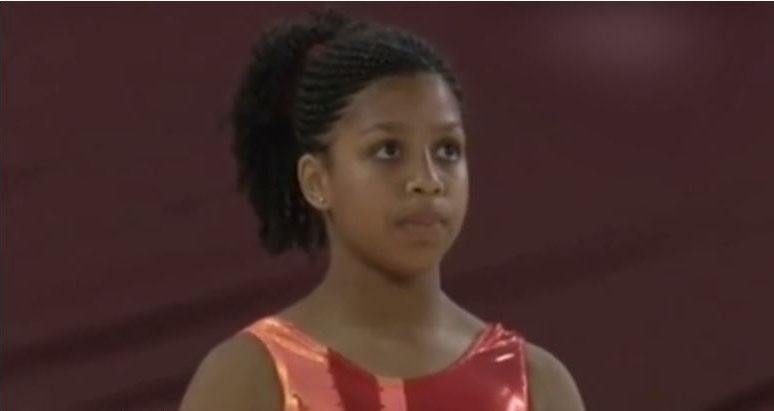 These champions1Sierra Brooks, Daisha Cannon, Luci Collins, Olivia Courtney, Naveen Daries, Dominique Dawes, Nia Dennis, Jennifer Dipa, Makarri Dogette, Daiane dos Santos, Gabby Douglas, Dianne Durham, Yesenia Ferrera, Annia Hatch, Ashleigh Heldsinger, Laurie Hernandez, Kiya Johnson, Dipa Karmakar, Jennifer Khwela, Rankoe Mammule, Sibongile Mjekula, Betty Okino, Elizabeth Price, Caitlin Rooskrantz, Tasha Schwikert, Jamison Sears, Stella Umeh, Gabby Wilson, and Corrine Wright, all of them young women of colour, are the stars of Thenjiwe Niki Nkosi’s video Suspension and the inspirations behind Gymnasium, the artist’s first solo. For most of us, I think, gymnasts only crawl across our radar when they do something fantastic. Like when, most recently, Simone Biles became the World Championships’ most decorated gymnast of all time, not to mention the four gold medals she won at the 2016 Olympics. But Nkosi calls us to examine what our expectations of these young women reveals about our cultural expectations at large.

After all, women’s gymnastics is about labouring towards both an athletic and feminine ideal. Death-defying feats are expected to be performed with grace, beauty, and control. Strength needs to be played down with makeup and crystals. Points can be deducted from a gymnast’s performance if her smile falters or if she fails to play a role. She is scrutinised both on the mat and off, chastised if she is not bubbly enough, not humble enough, not dignified, not civil.

Nkosi’s painting Team shows how behind-the-scenes moments are as much a subject of the sport’s voyeuristic tendencies as its athletic feats. Here, the girls are hugging each other, congratulating one another. At least one appears to be crying. Because she has won or lost, we don’t know. This moment of intimacy and vulnerability, success and disappointment, is being watched. Cameramen in the background aim their lenses inches away from the athletes’ faces; they are being judged even when they are not performing.

Team reminds me of this photo2

from the Rio Games, for which Gabby Douglas’s less-than-pleasant expression received international reproach. Young, black gymnasts like Douglas are doubly-scrutinised and vilified for whatever normal human emotions racists rebrand as ‘bad behaviour.’

Nkosi troubles this by imagining a different kind of audience for her gymnasium. Audience shows spectators enraptured rather than enraged, engaged with what looks more like inquiry than inspection. The way in which Audience turns its focus from athletes to spectators subverts the power of the gaze inherent in both sport and art. We get to marvel at how Nkosi can convey emotions like suspense, anticipation, boredom, hope, and intrigue without facial expressions, and the gymnasts get to have a break.

In this show, the closest Nkosi gets to a ‘sharp white background’ are her abstracts. Spring Floor IV and V have a calming presence to them, a cleanliness reminiscent of Ed Ruscha or Jo Baer. Matte colours, crisp edges, minimalist composition. They remind me of how my brain feels after meditation: not a blank slate, but thoughts cleared of fuzz.

Consider Spring Floor VI. What may appear, at first, as an empty square with some gym equipment strewn about the background is, for the performer, the very stuff of stage fright. Brief serenity before she flips and the world becomes kaleidoscopic. The spring floor is the static antithetic to the athlete’s motion, a symbol of both glory and catastrophe. The big white square in the painting becomes a mirror for the big white square walls of the gallery. The artist’s question is the same as the gymnast’s: how will I use this stage to prove myself? What risks will I have to take? What self will I project into this space? What energy will I use my power to invite?

Nkosi puts it this way: ‘The artist, like the gymnast, is witnessed and judged: trying, succeeding, failing. What inner resources allow a person to emerge – walk through, walk away – from such glaring scrutiny not only with their humanity intact, but with grace?’

Nkosi makes work about champions because she is one. That comes with perks as well as burdens. After all, the art world can be pretty fucked up. It’s full of people who will happily make money off of other people’s trauma, people who make and break promises, people who have interest in your name only insofar as its investment potential.

As an artist, you have to deal with people wanting from you all the time. If you are an artist and a woman, you also have to be civil about it, controlled, graceful. Only male artists seem to be allowed to act out or make bad art and punt it as irony.

Being an artist requires a great deal of personal and emotional risk off-canvas. Openings can be fun, but they can also suck. You have to dress the part, remember your lines, smile for collectors, answer people’s self-aggrandizing questions. People are watching you, or else watching your work, an extension of you, waiting for you to either astound or disappoint them.

Gymnasium, however, was not ‘on view’ in a traditional sense. Stevenson closed its doors to visitors as their way of curtailing the spread of COVID-19. Instead of postponing Nkosi’s solo, Stevenson premiered the exhibition online, blasting images on Instagram, posting a video of sooth-saying Nkosi’s walkabout, and inviting visitors to come together over a zoom call. Thanks to Nkosi’s openness and the hard work of gallery staff, especially Lerato Bereng, it seems to have been pulled off successfully.

I hope that Nkosi felt the love. I hope she got the spotlight she deserved. I also hope that the unconventional opening gave her time to reflect on her achievement.

Nkosi says that ‘the gymnasts themselves understand the necessity of the team, which is the foundation on which all ‘individual’ performances rest, and without which even the most talented gymnast could not succeed.’ Perhaps the art world is due for a similar psychological shift, where team dynamics are favoured over individual egos. Or, as Zoe Samudzi said recently, ‘a politic of artists understanding themselves as workers, a movement towards artists refusing neoliberal individuation, an embracing of refusal.’

Embracing refusal. What if instead of finding ways to keep the cogs of the market turning during crisis, we paused, reconsidered, took a break? There’s pressure to be productive, use the extra studio time efficiently. But the energy isn’t always there. The heart isn’t always in it.

The athletes are hanging out in the gymnasium, practicing. Or,  looking closer, not practicing. All the apparatuses for greatness are there, but they are not being used. Instead, the girls are idling. Chatting to each other. Taking a breath. Twiddling their thumbs. It’s a tableau of an interlude, a study of stillness, and a celebration of champions when they’re not working

Champion is another painting about refusal. The gymnast is in the foreground, walking away. Only one of the figures is applauding her. The rest of them are expressionless, motionless. There’s all this white space: a piece of paper becomes a dress, becomes a man’s tee-shirt, becomes another’s trousers. Almost like Nkosi had an idea for some characters but decided they looked better un-outlined. Perhaps Champion is a celebration of the work-in-progress. Or, it’s a celebration of negation.

Negation, to me, feels different from refusal. Refusal is about throwing away, burning up, saying no. Negation is about pausing, setting the tools down, not saying anything. Both are political.

I am drawn back to how Claudia Rankine writes about Serena after a referee makes a blatantly racist call against her: ‘Serena, in her denim skirt, black sneaker boots, and dark mascara, began wagging her finger and saying “no, no, no,” as if by negating the moment she could propel us back into a legible world.’

A feature by Keely Shinners

Art and Solidarity: On Benefit and Charity

What being looked at feels like: ‘About Face’ at Stevenson