A review by Vusumzi Nkomo on the 17th of July 2020. This should take you 6 minutes to read.

The return to the source is suggestive of a fugitive movement. It is to return by way of tracking back. ‘Returning’ is the being in motion; ‘back’ is the direction, a space-place. ‘Return’ is transgressive as far as it undermines all logic and logistics of ‘development’. This radically impulsive motion is an upheaval, simultaneously an ante-historiography and anti-historiography, which is both political in as much as it is aesthetic. Elder Pitika Ntuli’s solo exhibition at this year’s National Arts Festival, ‘Azibuyele Emasisweni (Return to the Source)’, and the accompanying explanatory gestures, are both more and less an exploration of these ideas. 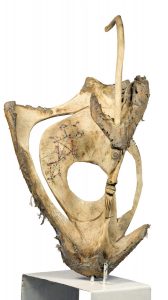 The exhibition is the pulse of the festival and the energy that troubles and reverberates throughout. I’m drawn to the shows that carry, augment, extend/stretch the thematic landscape of Elder Ntuli’s show in quite generative ways, ways that can enrich our understanding of ‘Azibuyele Emasisweni’, the ideas it is grappling with, and what it leaves unsaid. 1I’m fully aware of how I might be “accused of being irresponsible, cynical, pleasure-loving, world-weary and old before [my] time had arrived to be truly old”, as Lewis Nkosi would put it in The Fabulous Decade: The Fifties, his scathing drag of his elders on what he called “mutual antipathy and the mutual denigration between the generations”

The show is composed of 45 sculptures crafted from found objects: bones, beads, metal and wood. These articles, weaved together, expand the possibilities of nonconventional art practise. I want to think about how they are strung together, how a few other shows at the festival arrive, accidentally, at what is my central argument, and how they hint at what the Source ought to be if it is to be of any value for Black people, and – if I may be allowed a bit of generosity and imagination– the aesthetics, sights and sounds of the Source. 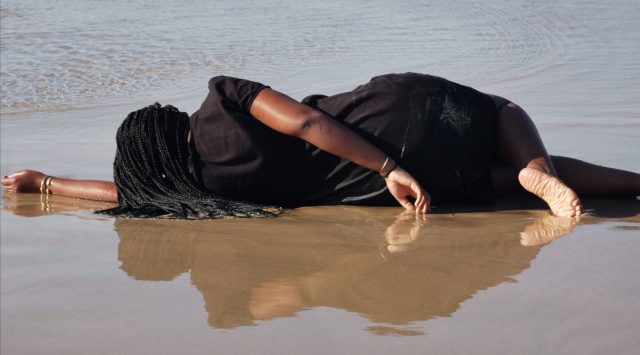 Ukuhlolwa kwephupha, a performance piece directed by Hlumela Matika, could be read as a project that presents the surreal expression of what might haunt the return, the possibility of its futility and the irretrievability of the Source. A Black woman is plunged into alternating and competing realities, a mirror erect in the sand, a moment of trauma by the sea when she seems to have been washed away by the violent waters that once transported her ancestors, and may possibly be accommodating them in its intestines, if the Drexciya mythology is to be entertained.2Unathi Slasha. Much with the Dead & Mum with the Dying, or: Rigidities of Rationalism Nelisiwe Xaba and Bobby Rodwell’s Nzinga, an audio performance project, doesn’t fall too far from this tree; narrated in a moving tone and a still image of red drapes pulled to the side with ropes to expose us to a haunting darkness that stares, it tells the story of an anti-colonial feminist ruler, Queen Nzinga (1583-1663), who commanded an army of 10 000 men of Ndonga to fight and ward off the evil of Portuguese colonialist before eventually capitulating.

The Source and its politics

The Source is a Well of radical practices of freedom and flights of fancy.

Elder Ntuli invites us to think of the Source as an episteme, a question of culture, in the same breath as Amilcar Cabral.3Amilcar Cabral, National Liberation and Culture And if the Source must be thought of as “placeholder for political aspirations,”4Saidiya Hartman, Venus in Two Acts then how can the Source (and our understanding of it) augment the discourse internal to the Black radical tradition/s, and precisely what options and portals it opens? Might as well ask: How sacred, how pure, is the Source? Was it also not tempered with, corroded? What is there left to salvage thus making it worth journeying back to?

Elder Ntuli invites us to think the bones as “grounding wires”,5Frank Wilderson and Saidiya Hartman, The Position of the Unthought. as vessels, and artefacts of the Source and the portals to the Source. They carry the “dissipated” knowledge of Africa, as Cedric J Robinson laments in Black Marxism: The Making of the Black Radical Tradition, and ‘memorys’6This is not necessarily the memories of the Source but the multiple ways of remembering. of the Source. But what is the relation of the Source to Maafa, the world-making powers of white supremacy, and the world that is the Hold, or “the Belly of the world”? 7Saidiya Hartman, The Belly of the World: A Note on Black Women’s Labors.What resides there?

The work Flames of Hope Inside the Amistad jumps to mind and provokes an interesting thought despite its seemingly overly optimistic undertones; undertones that should be permitted, quite frankly. Like when poet Fred Moten emotively suggests that Frank Wilderson III is called upon to remain in the Hold of the slaveship in Red, White and Black, “despite fantasies of flight”. Even though, as Moten admits, what was happening in the Hold was “precisely fantasies of flight, and capacity to fantasize about flight. . . imaginative flight, which produce radical disruptive imaginative capacities.”8See: Arthur Jafa, Dreams are colder than Death [film]

Elder Ntuli says to return, by way of bones, would lead to African spiritualism and knowledge systems. As Storm Simpson noted, his “sculpture is a fusion of the artist’s poetry, spirituality and individual expression”9 Storm Simpson, Pitika Ntuli , which Naledi Pandor, South African Minister of Science and Technology, declared in a talk with the artist to be the highest order of “artistic achievement.” 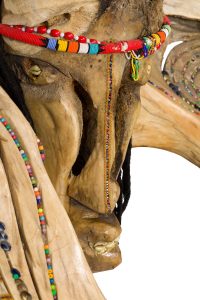 The sculptures are an exquisite case of astonishing craftsmanship. There’s an attempt to reconstruct the bones into recognisable human anatomy, staying true to implied bodily movements, while robbing us of any sense of identification more so at the level of gender. (We might ask what does it mean to exhume bones, and present them as living organism whose political status since the colonial encounter has been one sutured by social death?). Further, more impressive is the aesthetic choice of adorning some of the sculptures with beadwork (Rainbow Drops at Dawn, Warrior Queen of Africa, Medium on Fire, Swimming Against the Tide of Love, Warrior Spirit, Warrior Princess of Africa).

Hlonipha Mokoena, in an exhibition review of Beadwork, Art and the Body: Dilo Tše Dintši/Abundance (showing in 2015 at Wits Art Museum), acknowledges the “gender-neutrality of beadwork as apparel” contrary to Western society’s ethnographic and gendered construction of beadwork as for women.10Hlonipha Mokoena, Beadwork, Art and the Body: Dilo Tše Dintši/Abundance [Exhibition Review] Mokoena explains how wearing beadwork is understood as adorning oneself, or “ukuhloba”, a word that is etymologically related to “ihlobo”, summer, meaning that one gets to “place oneself in a complementary or competitive relationship with nature and one’s surroundings.” This relation of beadwork with the body turns tragic at some points when confronted with the subjects Elder Ntuli wants to see return to the source. As James Green narrates:

The chevron beads were produced in the late fifteenth century in Venice . . . were modelled on classical examples and traded throughout the world. They were extensively used by Dutch traders in West and Central Africa in the late fifteenth and early sixteenth centuries, where a single bead was—for a period—worth the life of a slave in the trans-Atlantic trade.11James Green, Beadwork in the Arts of Africa and Beyond 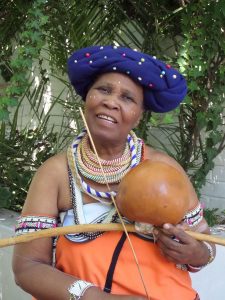 “Ndiyayithanda insimbi yakho” (“I love your metal [beads]”. These are the words by Mama Madosini, the South African musician, to Hlonipha Mokoena. Hlonipha narrates how it was Mama Madosini who brought a new reading of beadwork to their attention, and its (marvellous) relation to metal and animals. Mama Madosini’s work presented in the festival (over a 11 day period) adds great value to Elder Ntuli’s monumental project. In a sketchy episode ‘with’ musician Zolani Mahola, the Freshly Ground singer describes her as “rooted and routing” and thus inserting her at the center of Azibuyele Emasisweni, with her guiding ‘mrhubhe’, and hinting at the sonic possibilities of the Source. 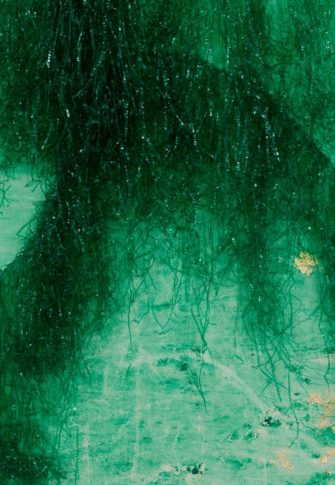 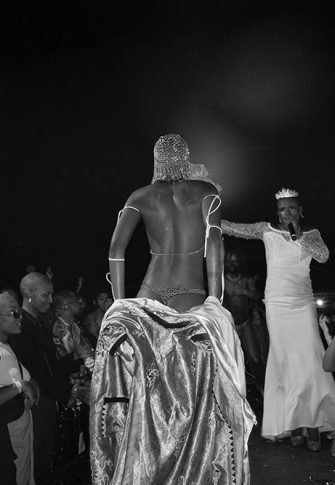 Black to the Fullest: Musa N. Nxumalo’s ‘We Are Running Out Of Hashtags!’ 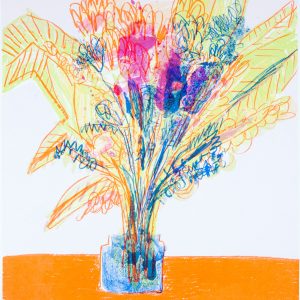