SMITH studio is currently exhibiting the work of artist Grace Cross, titled Pleasuring Ground. Born in Zimbabwe and raised in Johannesburg, Washington, DC and New Delhi, she has experienced many different cultures and ways of life across the world. One could say she has experienced many pleasuring grounds throughout her journey thus far and because of this formative cultural melee, Cross uses it as a great inspiration in her works. Cross graduated in South Africa at the Michaelis School of Fine Art in 2010 with her BAFA degree. For her graduate exhibition, “To Intervene in the Forest of Signs” (2010), Grace was co-awarded the Judy Steiner Painting Prize. Her work since forms part of the permanent art collection at the University of Cape Town. She is currently pursuing her MFA at the University of Illinois at Chicago.

When entering the exhibition space, these colourful works within the SMITH studio do seem overwhelming at first and to a certain extent exclusive, as it is difficult to understand an individual’s history and the experiences which they have had if one has not been a part of it or know them personally. Because of the drawing of inspiration from previous experiences, it is quite difficult to pinpoint the exact message that she is trying to bring across. Her work is affective in the sense that it allows one to feel, to wonder as well as to wander with her through her journey. The rich and colourful works draw attention and bring many questions to the surface, yet the audience will not necessarily be able to walk away with the wanted – perhaps any – answers. One walks into the SMITH studio with absolute wonder at the use of bright and thick colours, yet confronted with erotic violence, the use of religious symbols, pattern and strange animal-like human figures, which leads to a somewhat heavy and confused feeling. These works are not necessarily a literal representation of her journey thus far, as one cannot expect to see animal-like humans or a dog with a lemon as a head, but rather interpretations – with a touch of humour – of these experiences that she has faced

Considering the artist’s work, key features can be recognised with regards to the colour, pattern and imagery within her work, which seem to reference traditional craft and artefacts. Craft, which is used within the South African and African cultures traditionally to tell stories, can be recognised as remains of her visual and cultural identity as she uses her rich cultural background to create strong narratives and conversations within and throughout her work. She also uses felt in her work, which she considers to be a sister material to painting. She explains that both mediums have transformative qualities for her, by which she means that both have an earthly quality which reveal and eliminate their subject simultaneously.

Whilst wandering through these narratives in the SMITH studio, I am especially drawn to the amount of symbols in Pleasuring Grounds. Cross has explained: “A lot of the stories I tell have to do with the carnal nature of humans; seen through the personification of animals, of birth and life, and of the erotic violence of being human. I like to think of myself as a painting archaeologist excavating images of the past in the present to imagine a future-story. Myth is a reviving language that helps me coalesce and make sense of the hidden forces around me.” This language of myth to which she refers is the absolute essence of the show, as one is surrounded with an ongoing story of previous experiences, of birth and life, loss, nostalgia and the human figure in turmoil. Grace gathers symbols together to create these immersive environments, as one does with the setting of a stage or the preparation for a ritual, ordered to expose only a part of the story. These chaotic experiences which she creates – and which the audience feels when immersed in her work in the SMITH studio – layers apart a space where the magic of history and its vital healing power can be created through the polysemy of myth and broken communication. This polysemy of myth thus referring to the many possible meanings and messages that Cross is aiming to communicate through her use of many different symbols within her work and how these can be interpreted in many different ways. This use of symbols, at times overwhelming, to create narratives can lead to a sense of broken communication as she draws these symbols from many different traditions and life experiences that struggle to bring a coherent conversation across.

It is also of importance to take note of the historical focus of her work as a young South African artist, rather than the focus coming through a political point of view as many young artists in the South African art world attempt to voice their opinions on the current political situation within our country, yet are not always successful or noticed as it has been done so often. As a generation which grew up in a democratic South Africa, there is a certain loss of voice and message within the art world currently. Within Pleasuring Grounds, it is thus pleasing to see an artist embracing her heritage and history together with the different cultures that to which been exposed to – and telling these stories – instead of trying to make another political statement in a new and refreshing way. Curator and co-owner of SMITH Studio, Amy Ellenbogen states: “Grace’s work tends to follow the current trend in South African art. Previously, artists were looking at resistance voices in their practice, and now artists like Grace are looking beyond protest work and embracing their current circumstances boldly, [these being] issues that affect their generation. In Grace’s case she is able to do this effortlessly with humour and thick, solid, bright colours and textures. Her work allows us to not only feel a little uncomfortable but also allows us to laugh. Should we be laughing or crying? Questioning symbolism and religious practice next to sausages and cell phones. You decide.” These issues to which Amy gestures towards, being that of a generation embracing their history and tradition, yet not blindly, but with a sense of love and acceptance.

Grace Cross’s Pleasuring Grounds will have you giggle, blush, ponder and relate all in the space of one gallery and an artist’s life journey. As Amy states, whether we should be laughing or crying – it is all up to us as an audience. One question does however linger between all these colours; how does the exclusivity of the show influence its success? Quite drastically, I would say. 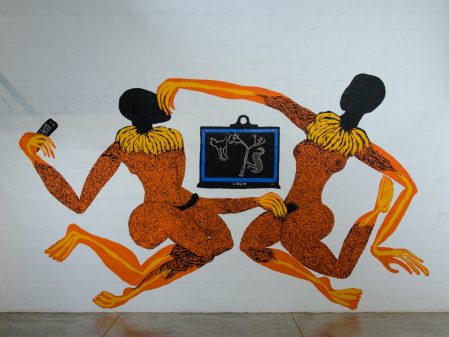 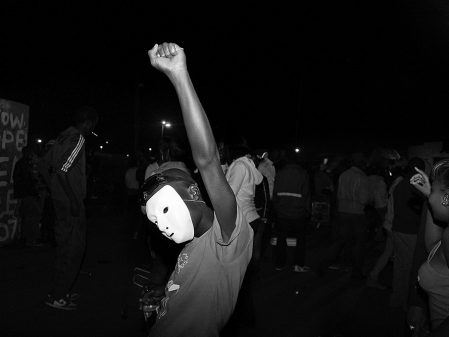