Jake Singer’s recent first solo show at the Hazard Gallery is a frustrating mix of potentially interesting work and portentous, often verging on pretentious titling and thematic organisation that reflects the self-concern of a recent art school graduate. Titled ‘CATASTROPHES’ the show is apparently concerned with taking a “jab at systems of logic,” and examining how the “aesthetics of confusion and chaos can also be the aesthetics of freedom.” All very well but there’s a certain neatness and restraint that prohibits Singer’s mixed media sculptures from evoking a true sense of chaos or freedom. In his horribly earnest, bad beat poetry rip-off artist statement on YouTube, Singer refers to the work as a series of “calculated catastrophes,” before saying things like “I sing Agnus Dei in the shower because it’s compelling,” and declaring that he “wants to live in New York before I die.” He also points out that in case you didn’t know, “the earth is burning (x2)” 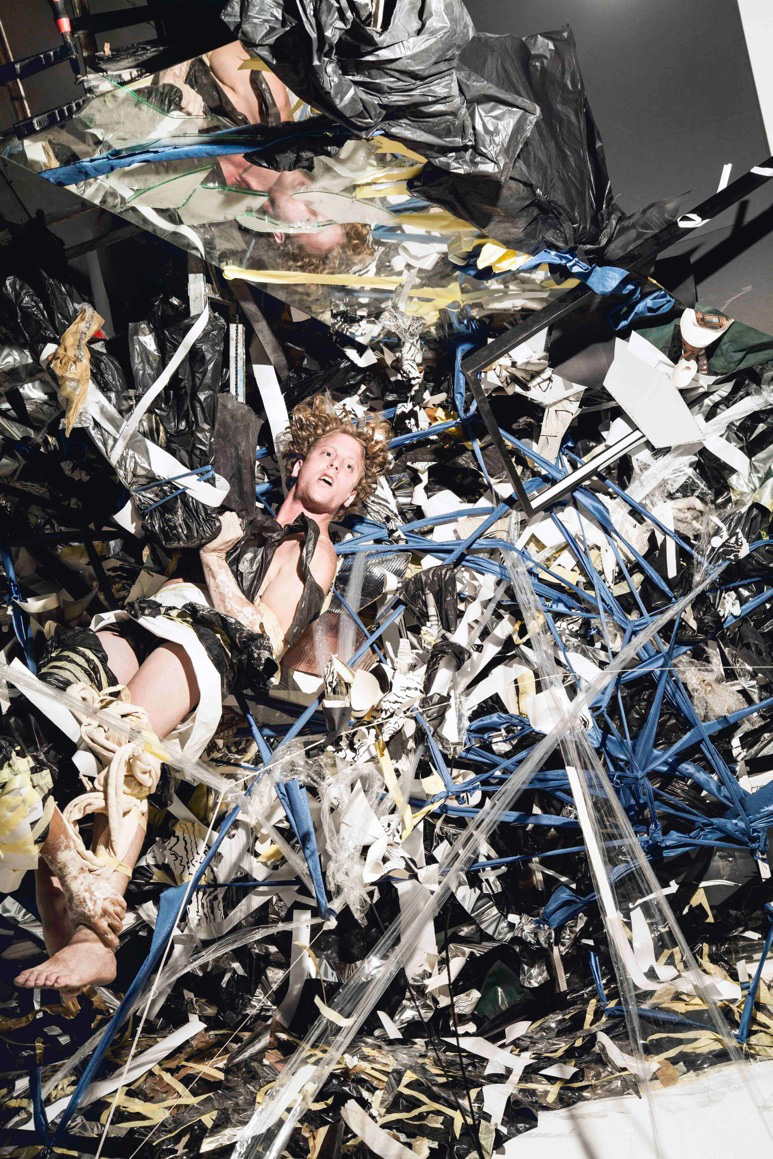 Catastrophe by its very nature is beyond calculation, saying Agnus Dei is compelling is pretentious and what twentysomething artist hasn’t wanted to live in New York before they die? The obviousness of these statements does no favours to the artist or his work. In a series of photos we see Singer as the central figure in a series of calculated catastrophic moments in which various elements of his studio have been arranged in too picturesque evocations of abstract expressionism. Bearing titles like First Rectangle with a Baptism, and First Rectangle with the White Guardian, they might be funny if their earnestness weren’t so brazenly apparent.

There’s a certain commendable Escher-like intrigue to sculptures like Escalation Incident with Dissonance, a conglomeration of impossible staircases and Bifrost, a similar but larger work made up of what appear to be steel bridges. However even in these the chaos that could be exploited to more meaningful advantage is controlled, leaving you with a sense of something almost where it needs to be but not quite being allowed to go there. Smaller works such as Window, made of found glass – what look like bits of car windscreens – suffer from a similar unresolved tension between aesthetic appeal and chaotic abandon.

Stylish enough they may be but as far as substance is concerned, there’s not much beyond a glib nod to modernist architecture’s love of concrete. Singer may display talent and technical ability as a sculptor with a keen sense of his materials and the formal aspects of the craft but they’re not in service here to much more than merely being on display. It’s adequate enough as a demonstration of ability but while that may be enough for a final year art school show it’s not sufficient for a first solo show. Show me what you can do but tell me something I didn’t know or hadn’t thought about. And yes, I know, the earth is burning. 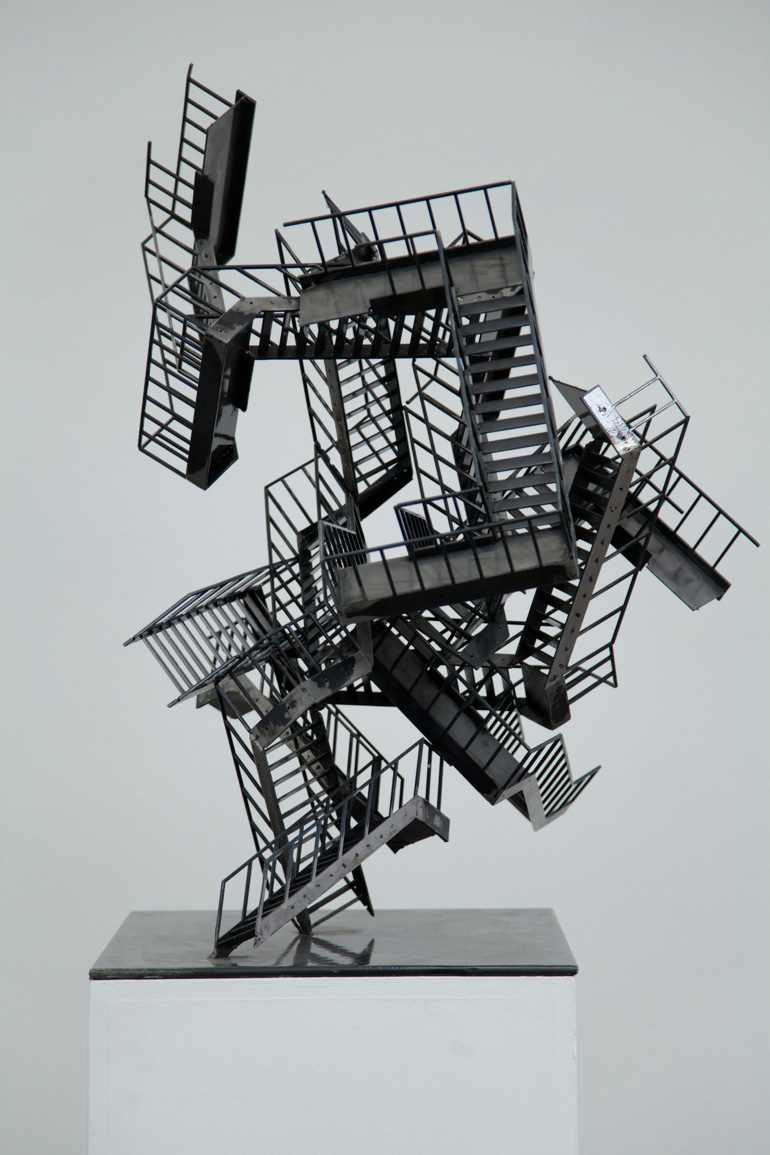 There’s little indication or interaction with the idea of the gallery’s position within a highly contested and fraught inner city space – Maboneng for all its appeal to hipsters, upwardly mobile Joburgers and weekend shoppers is not without problems as far as its relationship to the communities around it are concerned. This is not just a white cube located in a regeneration project, it’s also a place where a few blocks away people struggle with the harsh realities of life in an increasingly unequal society and to ignore that seems not so much an apolitical artistic decision as one that safely shies away from recognising what’s on the doorstep. No one is demanding that an artist born in 1991 be forced to deal with the segregationist hangover of apartheid but some recognition of the current circumstances of the location would have gone a long way to providing a layer of exploration beyond dull solipsism.

Then again “the aesthetics of chaos and confusion can also be the aesthetics of freedom,” and “Every brick laid, every code written is possibly a punctuated moment in the false grandeur of humanity,” so that means Singer is free to do as he pleases even if he contributes to another moment of false grandeur in the process. Ultimately this is cold, technically adept but passionless work that leaves little space for  reflection or emotion in the viewer. It may be “cool” enough to let Singer achieve his dream of living in New York before he dies but it’s certainly not nearly as compelling as singing Agnus Dei in the shower in your loft apartment in Maboneng. 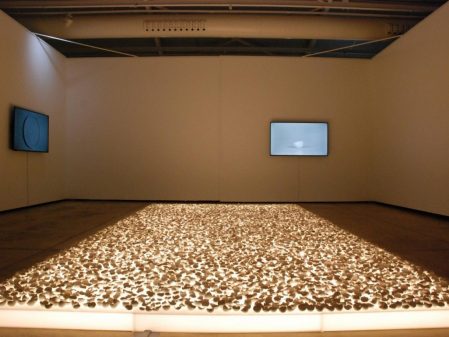 Breathing Space: Cathy Abraham’s ‘A Deeper Kind of Nothing’ 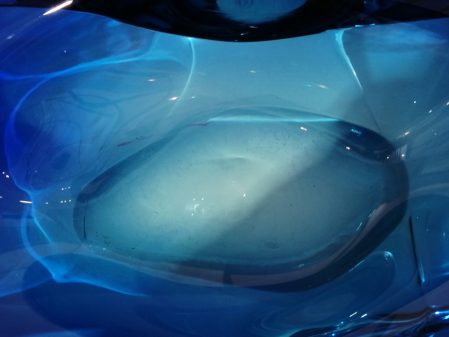 Ashes in Glass: David Reade and ‘Communion’ at Southern Guild 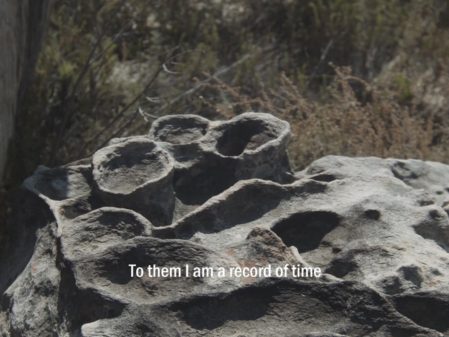 Rocky Terrain: ‘rocks’ at the gallery