It’s taken me longer than usual to tie down my words and to begin to interpret Simphiwe Ndzube’s ‘Becoming’. Knowing Ndzube, and being familiar with the idiosyncrasies of his work, this could easily have been just a sweeping and endearing review.

But how does one sweep and endear the residual objects of the societally effaced and the economically repressed as they take to the unforeseeable distance, blindfolded, perched on a zinc bath, atop a pallet?

A soulless hulk perched on the umpire chair, umbrella in hand, surrounded by corporate and white-collar vipers. Who is in control? 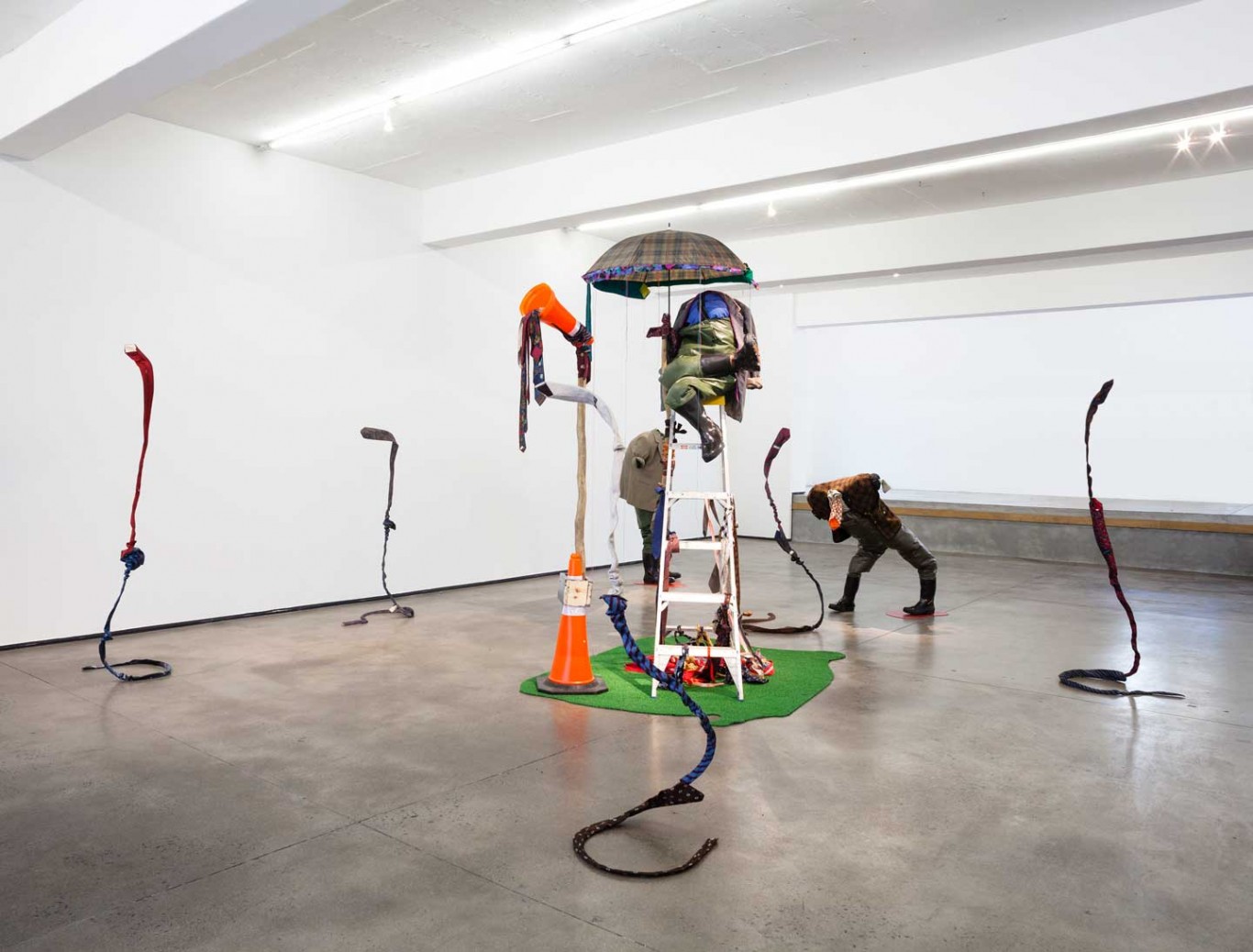 Ndzube’s attempts at wrestling with the residual effects and artefacts of the reduction of the human into a thing exploited and exploitable for capital are commendable. His eclectic elisions to the subject condition of these masterfully manipulated effigies, in their liminal circumstance, impress us with their true material condition, their being mere objects of capital, its push and pull.

Intentionally or otherwise, the space seems to be broken into two gendered realms with a masculine energy downstairs with is ties, circling vipers and gumboots and the topsy-turvy exuberant synchronised chaos of wigs, kiddie shoes, and high-heeled boots upstairs, alluding to some feminised and infanticised, precarious labour force. 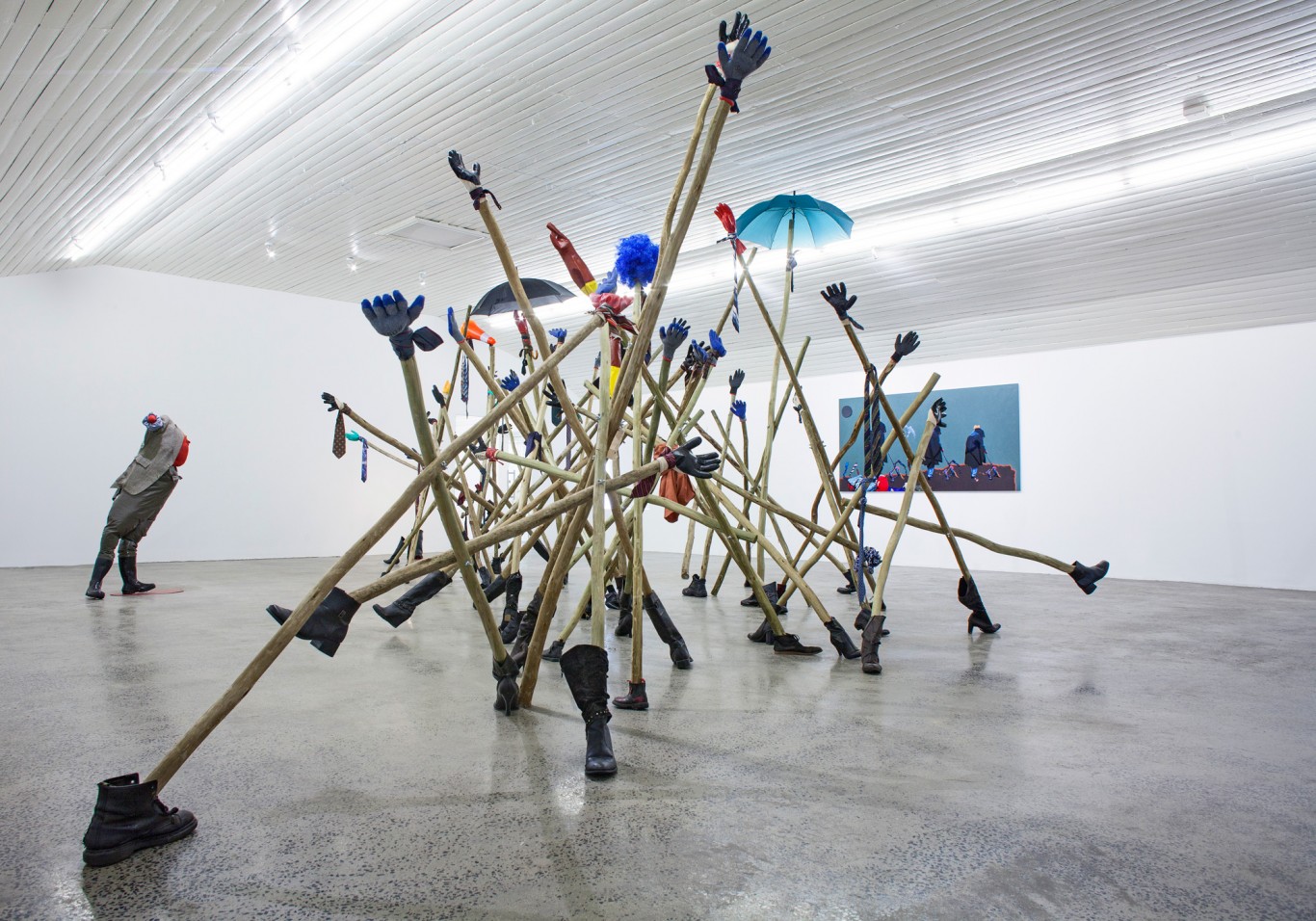 Ndzube’s references to the subject bodies, objects, and artefacts of people both real and distant, teeter tottering at the borders off all possible precarious conditions are the broad strokes that his totalising brush seamlessly contains across the two floors. This delicate shuffle between local and not local issues phlegmatically sits at the back of your throat as the exhibition gives you so much; but requires you to fill in so much more.  This has to be the brilliance of the work: its ability to be as global as it is local, while layering on so much without appearing to privilege any singular perspective or position.

I am most convinced and drawn in by the installations.

Ndzube’s soul crushing effigies personify estrangement, desperate hulks bent over double, gloves, and boots dovetailing with intriguing dexterity into themselves, drawing a narrative that becomes self referential across the exhibition. Without any undue adherence to realism and tropes, the body of work holds you with its conjuring of some amorphous force that – for all its dynamism – is somehow still impotent and subject to systems and logic, driving it to total exhaustion (and upon which anxieties may still be projected).

The disembodiment of both subject and figures functions no differently (or perhaps all too similarly) to a headline; a passing reference to lives exhaustively employed at the economic and spatial margins preoccupied with the bare essentials of sustaining life.

Other elements stand out too, like the material control and attention to detail, the overall self-conscious yet non-precious approach. This is especially evident in the Diasec images where the sheet is painted and fabric attached, the gold and leopard print duct tape.

For all its potential, and all its slippages, the exhibition does not disturb the status quo, instead it settles neatly within it like an extra layer of precipitation in a pressure cooker. You may question if it should however. With all its migratory over- and undertones, I suggest the question be instead: does it move you, and if it does, where to?

I’ve had my initial and secondary impressions, and have back-tracked on these initial instincts and since I am writing this with my thoughts rather unresolved, I take it as an indication that the works will need revisiting again and perhaps, again. 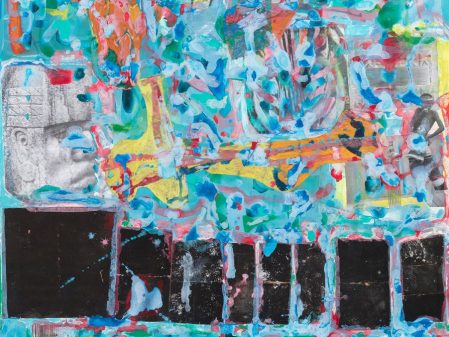 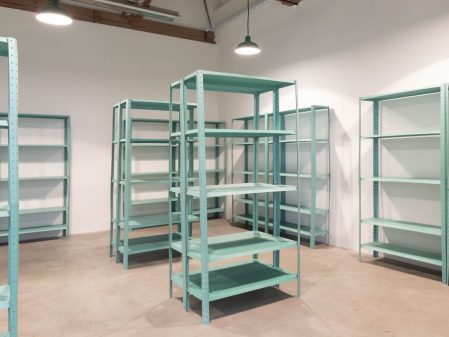