A feature by Sue Williamson on the 4th of April 2018. This should take you 7 minutes to read.

If you ever find yourself in Maputo, Mozambique, once you have enjoyed the essential treat of LM prawns, (still identified on menus by the city’s old name of Lourenco Marques, and famed throughout Africa), book yourself a Mafalala walking tour. It deserves its rave reviews on Tripadvisor. Booking can be done through the website of cultural community organisers, Iverca.

Iverca will meet you on one of the busy main roads through Maputo, and guide you down an inconspicuous side street into another world. Mafalala, designated for black Mozambicans under colonialism, is today a vast and vibrantly meandering community of dusty roads and narrow alleyways, rich murals, classic corrugated iron houses, giant avocado and ficus trees. And hidden courtyards where women’s dance clubs will perform traditional dances with contemporary overtones.

The Tufo women of Mafalala 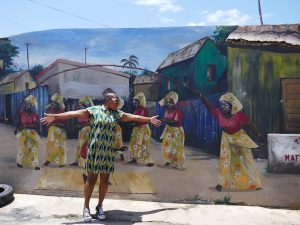 The children run everywhere, with their parents secure in the knowledge that the community has an eye on them. And all the time, as you walk, you will be given the history of the famous poets, the writers, the artists, the politicians and the athletes who grew up in Mafalala and have given it its unique character.

Soon a museum will come into being – it’s already well out of the ground – based in concept on Cape Town’s District Six Museum, which records the history of a vanished community.

I was lucky enough to be on a Mafalala walking tour last month. I was generously invited by Hastings Donnan and Fiona McGowan of Queens University in Belfast, Ireland, to attend a five day collaborative workshop with Iverca and dance club Machaka. The theme was the role of dance, art and drama in transforming conflict in Mozambique: From resistance to reconciliation.

Under the brisk leadership of Iverca’s Ivan Laranjeira, workshop sessions took place in the Ntsindaya Community Centre. A public performance with musicians, dancers and rappers to take place in the marketplace was planned for the last day. The theme of the workshop was ‘empathy’ and the group was asked to consider how their incredibly high energy dance choreography could also be used to tell a story of disagreement followed by reconciliation.

The workshop started with a lecture by Ivan’s brother, Rui, who gave a history of the neighbourhoods of Maputo from 1895 to 2018, with its parallels to the history of South Africa. In Mark Gevisser’s book about his childhood home, Lost and Found in Johannesburg, Mark talks of his youthful fascination with the map of Joburg which just seemed to stop dead at the edge of white areas.

Maputo has the same kind of map – a circular centre for whites, a carefully planned grid with each street labelled with its name, surrounded by a periphery which is a no man’s land of unlisted streets fading away into the countryside.

It is always important to consider the history of a place when making creative work.

My contribution to the workshop was to be a side event, during the week, a staging of an Other Voices Other Cities: Maputo project. The final choice for the statement was a line from a Mozambican poem, ‘What we start, can’t be stopped’. The group decided that the words should be spelt out in Portuguese, O QUE NOS COMECAMOS, NUNCA PODE SER PARADO.

The letters for the statement were cut out of foam board and painted at Ntsindaya. 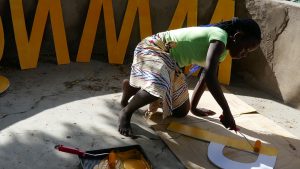 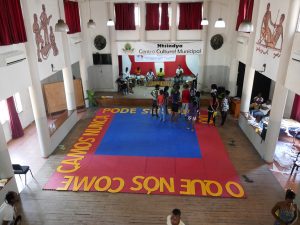 The full statement laid out on the floor at Ntsindayo

And the location was a wall in the middle of Mafalala with graphic portraits of famous Mozambican intellectuals The photoshoot went off perfectly. 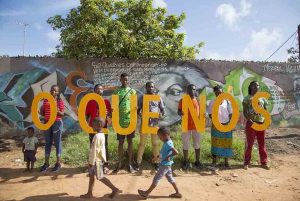 The first three words of the statement 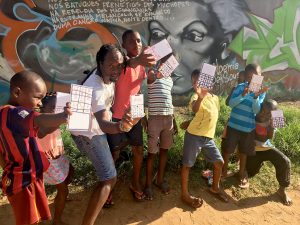 Samuel Djive and the kids

And all the little offcuts from the foamboard had been turned by artist Samuel Djive into ‘cellphones’ The kids loved them.

One night, we went out to one of the coolest, friendliest spots in town, Nucleo de Arte, a bar/club/series of artists’ studios all in one, with a complete cross section of everyone, from young to old, and with the cool evening breezes of Maputo drifting in to refresh the overheated dance floor. 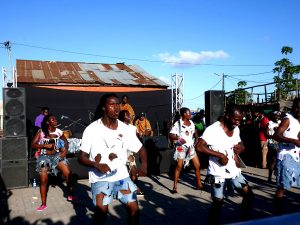 The Machaka dancers perform at the market

And on the last night there was the performance, in a triangular spot near the taxi rank in the packed Xipamanine market. My old friend, film director Mickey Fonseca dropped in to say hello before departing for the Berlin Film Festival in the morning. And the rapidly growing crowd loved the singing of Rhodalia Silvestre, and the frenetically rhythmic dancing of the Machaka dancers, telling their story of warring groups who find understanding and a common path.

A cooling down party for everyone at a nearby bar completed the week.

There was local music, chicken on the braai and beer, and the laughter and conversation spilled out on to the street.

Anyone reading my diary, when it does appear, might be forgiven for thinking I am constantly on the road, but actually it’s not true. It’s just that it often seems easier to write about travel stuff.

Earlier this month, here in Cape Town, we travelled in a different way to celebrate Nowruz, the Iranian New Year, at a special dinner. The event was hosted by artist Sepideh Mehraban at Gallery Momo against a background of an exhibition, curated by Sepideh, called ‘Cape to Tehran’, which featured artists from both cities.

Nowruz is the traditional Iranian festival of spring which starts at the exact moment of the vernal equinox, marking the start of the European spring, and also the start of the New Year in Iran. The name comes from Avestan meaning “new day/daylight. 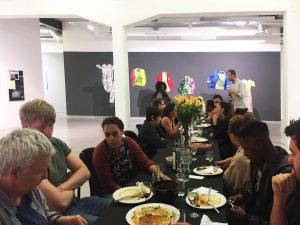 A Nowruz dinner at Gallery Momo

Guests to the dinner were asked to bring tea lights and flowers as part of the celebration. Not only did these decorate the long table which was set down the middle of the room, but each of us had to leap over a ‘barrier’ of candles and flowers and make a Nowruz wish. 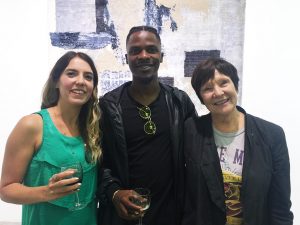 Sepideh Mehraban, Gerald Machona and me

In Iran, says Sepideh, we would have had to jump over a bonfire, with even children jumping over smaller bonfires, to symbolize leaving the past behind and greeting a New Year.

Special Nowruz delicacies were laid out on a side table – painted hardboiled eggs, for fertility, wheatgrass for health, a dish with coins, for wealth, and for pure enjoyment, honeyed baklava and tiny flower shaped delicacies made of chickpea flour and fragrant cardomam which melted in the mouth. 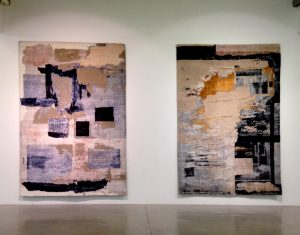 The carpets woven from Sepideh’s paintings

Sepideh’s own contribution to the exhibition included two contemporary carpets, woven in India in silk and cotton, with the pile cut to different heights carefully following every detail of two of her engaging paintings. 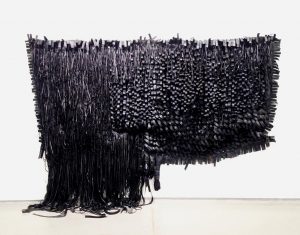 On another wall hung a piece by Patrick Bongoy, in his signature black rubber, a confident expression of woven and curlicued textures, somewhere between traditional costume and urban fetish. Patrick will be exhibiting alongside the legendary El Anatsui at a four person show in a kunsthalle on Gottland, Sweden, in the European summer. 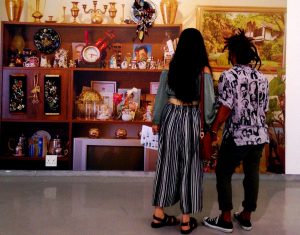 Stephané Conradie’s mixed media work of the kind of display cabinet found in so many South African homes plus its kitschy contents represented a different kind of fetish. 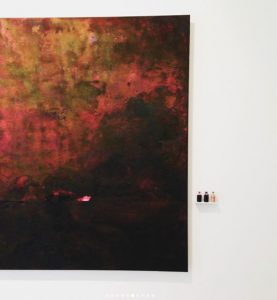 A Jo Voysey painting, accompanied by a shelf with three small bottles.

Jo Voysey’s paintings gave off a whiff of the medicine cabinet (her media of choice includes Friars Balsam amongst many other over the counter palliatives) and her abstract surfaces sparkled subtly with an almost otherworldy glow. Think kryptonite.

In the video room, Francois Knoetze presented The Big Hole: Counter Narrative Project. The Big Hole is, of course, Kimberley’s open cast mine with a depth of over 200 metres, excavated by early prospectors and miners for its diamonds. Asking young dancers from the Amandla Dance Group in Kimberley what meaning the Big Hole had for them, Francois Knoetze workshopped a truly engaging performance, in which the young had their say and acted out their feelings.

All very satisfactory, but I do have a Nowruz request to Gallery Momo: please consider putting up labels with the artists’ names and the titles of the work on the wall next to the work. It would really help the viewer.

P.S. The Nowruz photos are by Michaela Limberis, and the artwork photos were taken by Megan McNamara 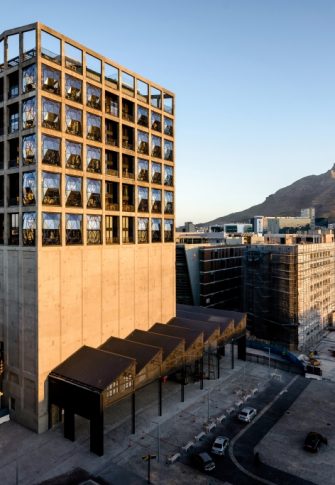 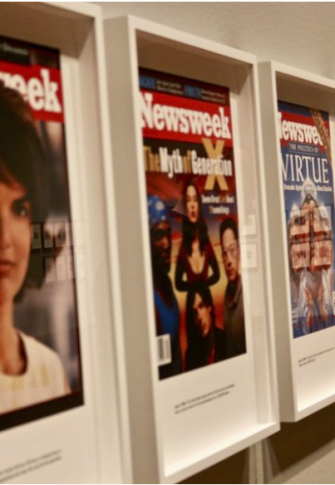 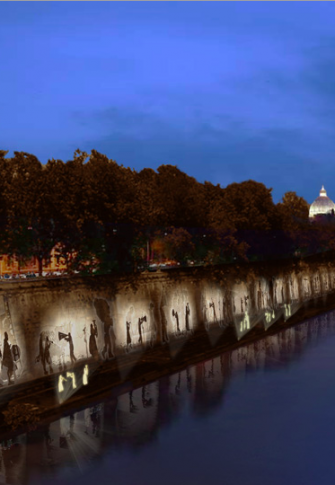 Sue Williamson’s Diary: Not since the painting of the Sistine Chapel … 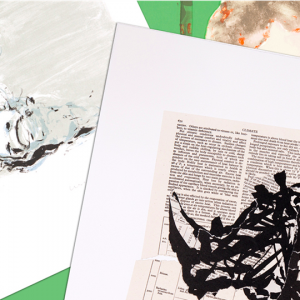