I went to see Jonathan Hindson’s ‘Home’ at Gallery MOMO  and naturally, Toni Morrison’s novel of the same title sprang to mind, especially its epigraph: ‘whose house is this?’ For the book’s protagonist, Frank Money, home – far from being a kind of permanence or belonging – becomes a site on which to contest the very ideas inherent in its classic definitions. Home, in Hindson’s series of paintings, seems to be losing its grip on permanence  and finds itself as nothing more than one’s own self-delusion.

Hindson’s paintings are often forlorn, disassembled, with an acute sense of alienation, that speaks to the misrecognition of a place one ought to call home but which has, over time, become some bleached out, disintegrating trace of memory.  As such, one gets a disassembled conception of home; a home that is neither real in one’s imagination or in one’s sense of objective reality.

It is tempting to conflate Frank Money, who is a war vet from Korea returning home reluctantly, with the story of Hindson, an artist who grew up in Johannesburg in the 60s before leaving for France and only recently returning. Both men leave their respective, segregationist societies for distance world – one an integrated army and the other, a democratic Europe. Upon their return home the former finds a segregated space and the latter  finds a democratic place that still reels from the legacies of its segregationist past. The fact that the one man is black and the other, white, is of critical importance since each body experiences his homeland uniquely from the other. And, as such, however tempting it might be to make both exiles equal upon their return, the writer ought to separate his peas from his pears. And perhaps, the only real intersection between the protagonist in Morrison’s novel and the visual narratives carried within Jonathan Hindson’s paintings  is that of a human being searching for a meaningful subjectivity and, perhaps, selfhood.

To compose his paintings, Hindson uses photographic images  which he distresses onto wood over and over again in order to achieve a surrealist phantasmagorical quality.  In Walk on by a young woman is seen walking down a street by herself, with a house perched right above her. Outside the house an elderly woman appears to be looking, even watching her. Or – and this is because of the layering and the unnatural light – the woman by the door is looking at us, the viewer, or the photographer who took the image and who has, in a sense, implicated us in the process. This multiple remove – that of us looking at the lonesomeness of the woman walking down the road, past the house, and being watched, like unwelcomed voyeurs; that of the eye of the outsider (the photographer) who gives us a glimpse of the moment in this communal setting, and that of Hindson, the painter, who further obscures our view through his process of vanishing the image until it is but cloudy fog of smoke  alienates us but also poses the question: is this place home? Needless to say, the setting is a black township. Perhaps, here, Hindson is speaking directly to laws such as the Group Areas Act, which, in fact, took people out of their homes and dumped them into matchboxes along the fringes of cities such as Johannesburg, in the guise of giving them ‘new’ homes. Perhaps he is looking at the current RDP programme and its own perpetuation of apartheid era spatial arrangements both in the building of similar houses and in placing them away from green suburban spaces. It is worth noting that it is in this moment, especially for the artist returning to a supposedly transformed place, that home – as in homeland – is an enigma: that everything has changed by remaining the same.

The images, even the seemingly sunny ones, for lack of a better word, are haunting.  Haunting for their lack of a lucid  reality to which we might hinge our own subjective selves in some kind of temporal similitude with the imagery in the paintings. Not only is the work literally grey in palette but it is also grim in its depression and the way in which light seems swallowed up and sometimes merely reflected crudely and garishly on surface speaks to a state sandwiched between the two iterations of light and that state is made up of desperate yearning – a desire to come out of one’s self-imposed alienation and expand oneself into one’s first home, the body. I had first read the work with a particular reference to home as South Africa or some patch of land elsewhere. And then, after a while thinking about it, I began to find this alienation an intrinsic feature within the consumerist culture of late global capitalism. That, in fact, now more than ever, the human being – naturally a social creature, warm and self-loving, one hopes – has receded into himself into such a horrid, haunting state that not only can he not distinguish the real from the imagined, cannot distinguish who he is from what he has been told he is, and has thus been unable to even recognise, within himself, his own innate humanity for he knows not what to make of it. “Whose house is this?” Tony Morrison asks. “Say, tell me, why does its lock fit my key?” 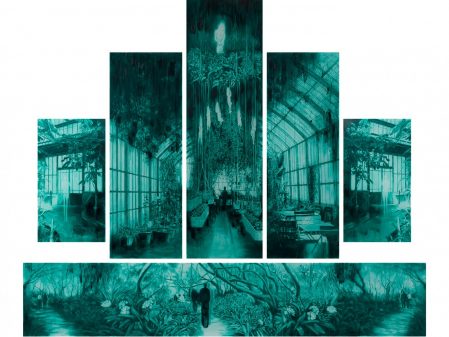