A feature by Kira Kemper on the 29th of April 2016. This should take you 6 minutes to read.

The following interview took place via e-mail and over a Doubleshot coffee in Braamfontein, 25th April 2016.

Kira Kemper:  Your work, To Be Determined/ Life in a Hole, is upon first glance, a fascinating and witty exploration of seismic activity in Johannesburg. The month-long installation grew in the space, developed, changed and transformed. This constantly shifting body of work is playful and at the same time ominous… 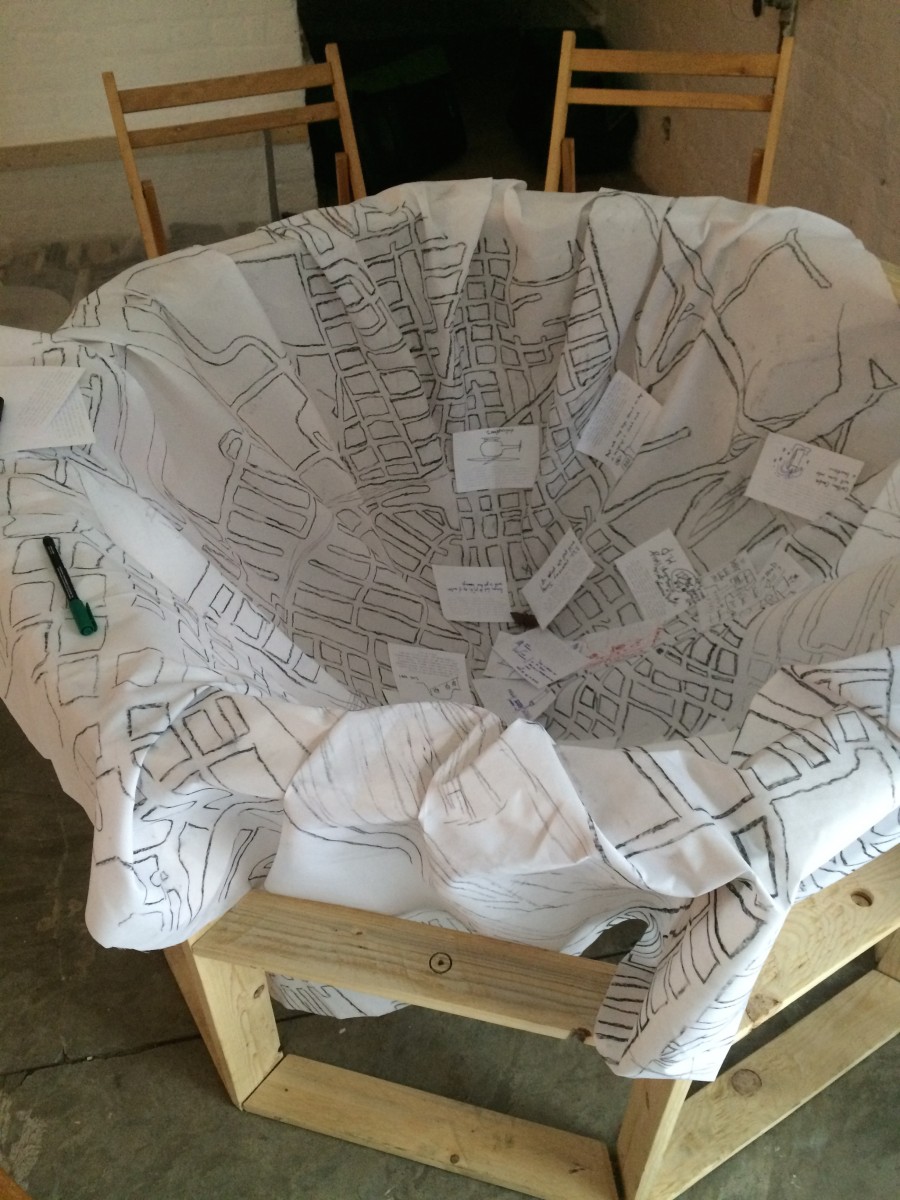 Skye+Karin: The installation was openly collaborative and participatory including presentations of research by mining geologist, Kgothatso Nhlengetwa, and paleontologist, Cameron Penn-Clark. Healer Oran (Andrei van Wyk), an experimental electronic musician, wrote a creation myth prompted by his time in the space, called The Book of Darling. There were other events including a party where participants were encouraged to“make seismic activity” with you, and a round table discussion/ workshop where participants wrote their last wishes and placed them into an ingenious crater made from a basic wooden frame; a map of Joburg drawn onto a white sheet that was then draped over the frame to create the concave crater/sinkhole.

Kira: I can’t help but develop my own disaster mentality after spending time in the space and having a look at your flyer. One image that seems to be haunting me is the image of a badly photoshopped Nelson Mandela Bridge falling into a massive hole- your artistic perspective sketch of Joburg swallowed up into an inevitable sinkhole of doom. There are three images on that flyer, the other two showed both an aerial perspective of Johannesburg with the massive hole in the middle of the CBD, and one of that same area of the CBD placed into a desert/flood or some other desolate place. It seems poignant that Johannesburg should physically implode while imploding financially, politically and, I suppose, socially. When will Johannesburg sink, or has it already sunk?

Skye + Karin: We think we panicked some people with that flyer. Maybe they should be a tiny bit panicked. Is it possible to say that Johannesburg is constantly in the process of sinking and resurfacing? A city built on life below the surface, which informs the mounds above the ground, has a close relationship with excavating and replacing, sinking and rebuilding. When we sink, as portrayed in the flyer, we have faith that because of its agility, Johannesburg will be one of the places that has the means (attitude) of adapting to life in a hole.

The process of our work has allowed us to think about Johannesburg pre- and post- implosion. Overall the installation does not exist in a single imagined time frame, rather different parts may refer to pre- and/or post- disaster. The strategy of making this an ‘active’ installation is so that works can continuously change the more our ideas develop around the ideas and materials we are working with.

We wanted to create a kind of calm tension that might be felt in the eye of the storm. The Goethe space was temporally situated just before sinking, just after sinking, as a projection and as a current state of events. The installation examines the various imaginings of how we will exist in the hole and how we can prepare for the life in a hole.

Kira: So looking at this flyer again, this image you have created of the hole. Is this an accurate depiction of what the hole will be like? I mean, did the geologist say that this is how the hole will form and this specific area is going to implode?

Karin: No, no. [Laughs] The mining geologists have said that it would probably collapse along the actual mining areas. 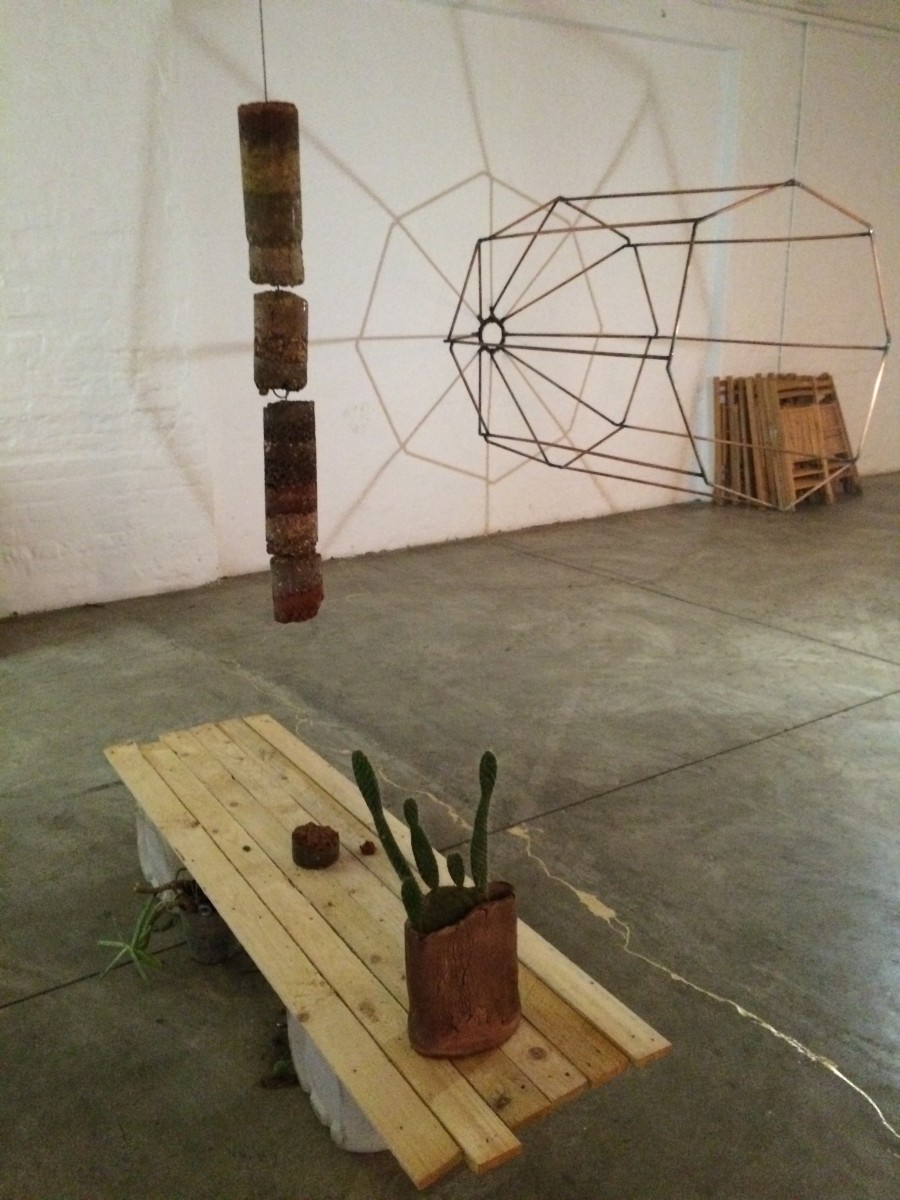 Skye: Although another concern for sinkholes is that Dolomite is quite corrosive, when it reacts with water it erodes quite easily. I think maybe with the Dolomite, and this might not be accurate, but I think the sinkholes would be more linear. Like riverbeds rather that our big hole.

Kira: The works themselves are very clever. They are processes, provisional, made quickly, as if emergency were a creative state. This provisional wit is an aesthetic that you seem comfortable to reproduce, a language that you understand. Looking at your floor plan which you gave out in place of an artist statement, I get the feeling that the work seems to engage not only with the subject matter of the geologist, but the aesthetic too. As a child I loved looking through old books full of graphs, drawings of the earth dissected, layers of different earth and rock exposed. It seems you have a similar child-like fascination with these scientific representations of the natural when looking at Core Counterbalance, for example, the work brings this idea to life; exposing the layers of the earth, but allowing one layer to fall off dramatically, disastrously. Could you tell me about how your provisional approach to this project manifested?

Skye + Karin: Ya, we do work in the processes of emergency, such as preparation, damage control, the deviations into panic and the short lived moment of calm that come out of disaster, while experiencing a fictional, possibly potential, disaster. Within our ‘creative state of emergency’ we try to use languages or processes that have a flexibility or adaptability. This allows us space to do, undo and redo without destroying, rather, repositioning the coordinates/boundaries.

You could say that we put ourselves in the position of the ignominious scientists conducting experiments in/with the city.

We started this process with various maps and photographs, and definitely with simple diagrams from amateur and even children’s geology and geography books. We collected various pieces of data, and patched them together to help us survive the sink. The first thing we built was a large seismograph, modeled on an ancient chinese device that measured seismic activity. We later realized that in order for this seismograph to work, an extremely large-scale seismic event would have to take place. We crossed our fingers for an earthquake and in the mean time built smaller measuring devices. The seismograph hung imposing and silent. It was adapted throughout the month, but we didn’t record any large-scale events. It is a process of trial and error.

Kira:  How incredibly sadistic. Let’s get moral about this. What are the ethics involved in killing thousands of people?

Skye: Hahaha [nervous laughter]. But seriously, we are talking about regrowth from the hole not killing people, but people resurfacing themselves. We don’t want to kill anyone.

Karin:  Well, one of the suggestions that someone gave us in our workshop about living in “the hole” is that it might help us with our experience of global warming, because one kilometer down, it might be cooler to live under the ground. And so there are many positive things that have come out of this idea. 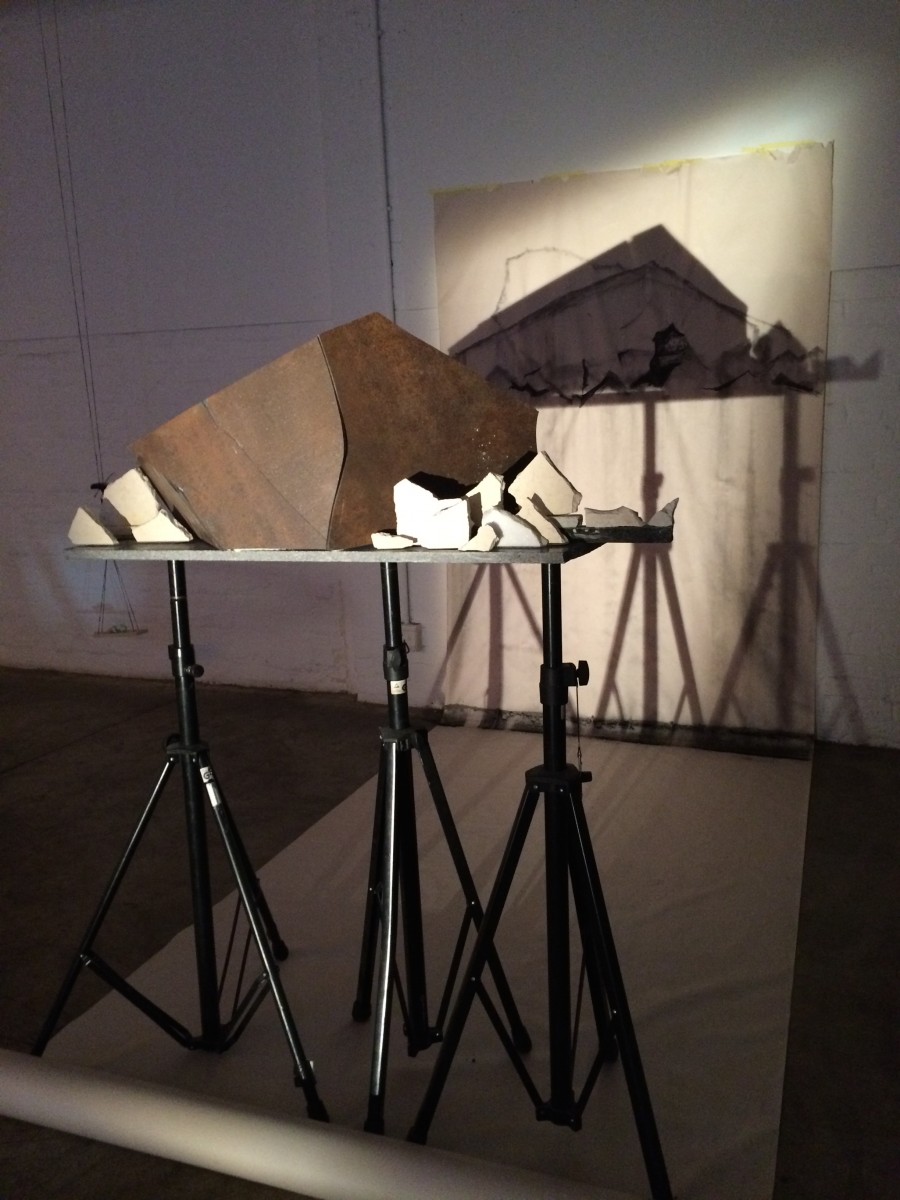 Kira: One of my favourite objects on the show was the mountain viewfinder, which is a kind of model of a mountain made out of thin stone shards. A light is then used to cast a shadow of the mountain on the wall behind it. Can you tell me a little more about this work?

Skye: I think we made this work, in a way, to try get used to mountains.

Karin: Ya because the hole will have these walls, mountains, you know. I recently spent some time in Cape Town  and I was quite interested in how Cape Tonians like to orient themselves according to their position to the mountains. But I didn’t know how to do this, because in Joburg we just don’t have that. So I worried that I wouldn’t be able to do that very well. So the mountain viewfinder helped us to create mountains, to prepare ourselves for life in the hole.

Kira:  I am wondering about your inclusion of Healer Oran and his creation myth that he made in the space. Are you looking for religion now just before the disaster strikes? Time is short..?

Skye:  Well ya.. also we took a trip to the transport museum before the project started and we found these crazy old missionary trams that had these slogans on them like, “The Price of sin is death”, and “Prepare to meet thy doom”, which we found incredibly negative and also strangely motivating.

Karin: I think to a certain extent our thinking borders on conspiracy therories…Or no I don’t think, it is about that. Healer Oran’s involvement spoke to a certain fanaticism that is shared between conspiracy theorists and religious thinkers. Like preppers, you know.

Kira: I don’t know what a prepper is!

Skye: Oh, preppers are these people who you see on reality TV, and they collect supplies in their basements. They have barrels of honey and beer.

Karin: And they are actually very specific. Like some are preparing for a zombie apocalypse. And then we found South African ones too. They are very hectic, strange Afrikaans people expecting disaster, planning and plotting their escapes. We are interested in how these niche practices might arise in our work.

Skye: But we are quite hopeful, even thought we are dealing with disaster. 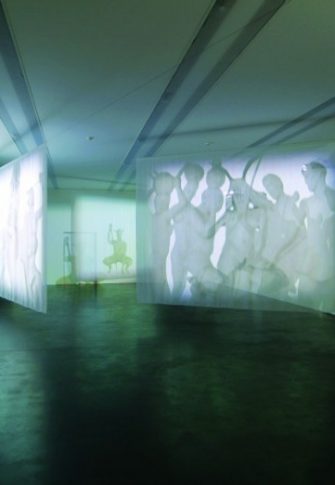 A review by Kira Kemper

A Deeply Personal and Political Journey: Minnette Vári’s ‘Of Darkness and of Light’

A review by Kira Kemper 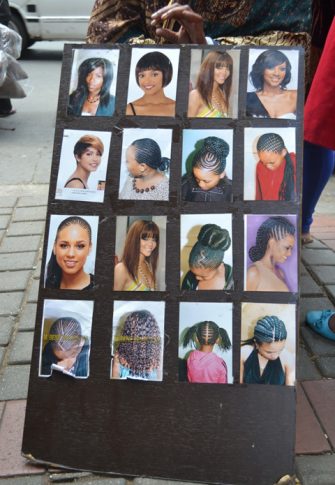 A feature by Kira Kemper

The Architecture of Hair