A review by Tymon Smith on the 8th of March 2018. This should take you 4 minutes to read.

Ubuntu is one of those concepts that over the last almost three decades has been celebrated, vilified, chewed up and spat out as a vestige of the Mandela era. A nice idea from the era of hopefulness that has so quickly come to seem so far away, swallowed up by increased inequality, racial tensions and the kleptocracy of the Jacob Zuma. That may have been the state of affairs when artist Usha Seejarim first began to mull over how to approach the request of Standard Bank that she curate a show made up of works from the over a thousand artworks representing work by 250 South African artists in the bank’s collection. In the bleakness of what we now know as the end of the Zuma era,  the idea of Ubuntu – of being because of others and acknowledging this interconnectedness in our everyday lives – seemed to have being smashed underfoot in a society whose idealistic social contract was tearing at the seams as self-interest, luxury cars and Moët ruled the day.

While there is certainly much political cache to be made out of Ubuntu and its long history and many obvious message heavy art that could illustrate it, Seejarim’s show I am you because you are a search for Ubuntu with permission to dream reflects her approach as an artist rather than a curator – mixing the blatant with the subtle, creating a long historical link and providing many works that offer a spiritual and ethereal rumination on the very human ties that bind us all across generations and into the future with a quiet reminder of the fact that the exhibition takes place in the centenary of the birth of Mandela. It also now finds new meaning in the heady new idealism of the Ramaphosa era, and there is of course no harm in one of the country’s major financial institutions getting enthusiastically behind a socially uplifting concept in the age of increased bitterness and suspicion of financial institutions.

Beginning with Kudzanai Chiurai’s iconic The Minister of Enterprise (2009) as a marker of how very not un-Ubuntu we have strayed, the show juxtaposes images from across the many eras of South African history in its search for both the historical significance of the concept as well as new ways of approaching it. Thus Willie Bester’s Social Engineering (2009) provides a meditation on the aspects of everyday life which still exist to remind us of the long shadow of apartheid’s structural separatism; working nicely in tandem with Sam Nhlengethwa’s Baragwanath Bridge (2006) and the colourful vibrancy of Tommy Motswai’s Taxi to Joburg (1992). Gerard Sekoto’s Sophiatown Evening, positioned on its own wall offers a further complicated mix of melancholia and gentle contemplation of a dappled late day township street – a place impossible to think of outside of its oppressive history but given a deep humanity by the painter’s careful treatment.

As the show progresses, Seejarim includes several pieces by 19th century English artist Samuel Daniell which serve to highlight the daily lives and dress of the Khoisan and the early inhabitants of the Cape, which offer historical evidence of the people who came before us. There are also digressions into natural history with a Daniell’s drawing of a Quagga and a Barbara Jeppe study of a monarch butterfly – reminders of the natural world’s connection to us and the playing out of similar cycles of birth, death and rebirth.

These cycles of life are emphasized in several works which, as Seejarim writes in her introductory essay to the exhibition’s accompanying catalogue, serve to offer perspectives on “personhood and it’s qualities” – the indistinct faces in Lisa Brice’s pair of Portraits (2005), Joni Brenner’s pair of sculptures Tremonos Guardians (2008) and a selection of delicate and moving drawings by Thami Mnyele with Things Fall Apart (1976). The idea of interconnectedness is best demonstrated by Kim Lieberman’s pair of Human Constellations. But of course this is South Africa and so not all the works presented are mere illustrations of ethereal ideas about our shared humanity and interconnectedness through the mere living of the thing that is life. 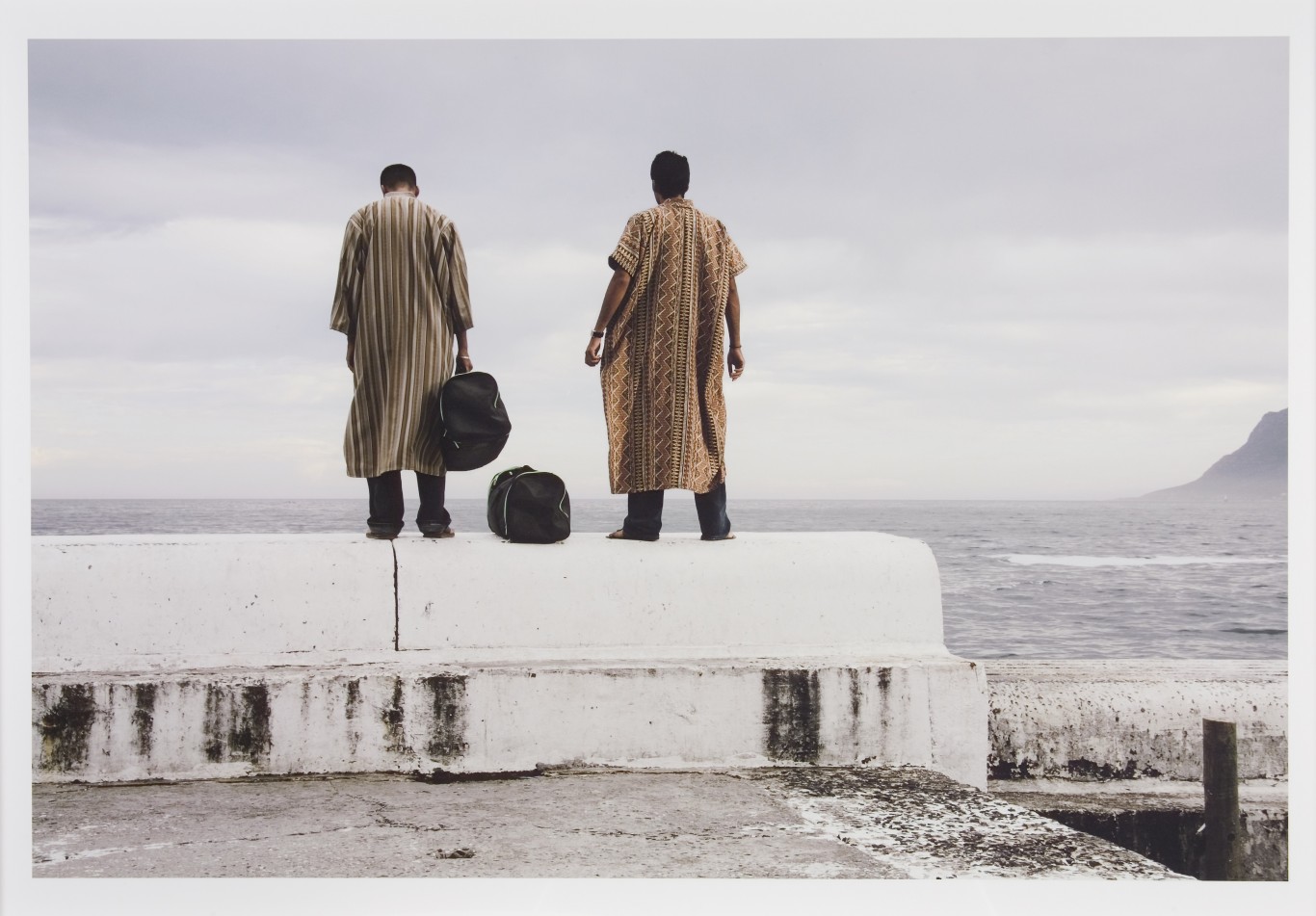 Life as evidenced by the series of Dumile Feni drawings is also tough and sometimes ruled by violence, anger and frustration. It is also one of displacement and the weight of memories as suggested by Haroon Gunn Sallie’s sculpture Sunday Best and the uncertainty of arrivals in unfamiliar new territory and the mix of possibilities and fear which this evokes in the Essop Brothers’ Cape Town (South Africa) Variation (2009).

Whether or not the eagerly anticipated change of leadership we’ve just so enthusiastically embraced will be more of the same or the beginning of a space where we have not only the permission to dream but also the possibility of realizing those dreams remains to be seen. But for now, this considered and nuanced selection of works opens up new ways for us to think about how we might return to thinking about ourselves as part of something greater than solely our self-interests. As both Seejarim and Ashraf Jamal remind us in their accompanying essays, we live fuller lives and create better art when we take heed of Henry David Thoreau’s words: Could a greater miracle place take place than for us to look through each other’s eyes for an instant? 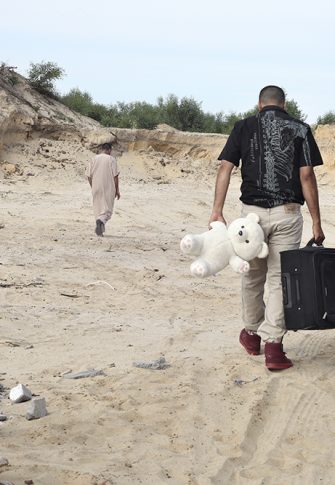 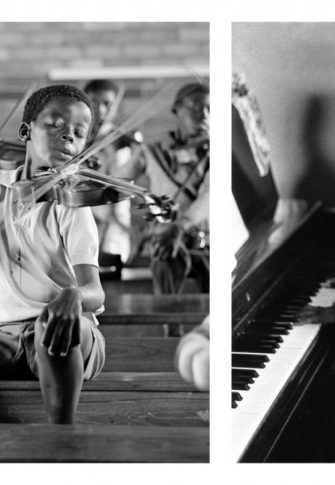 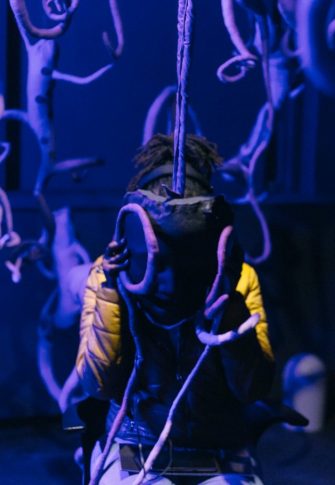 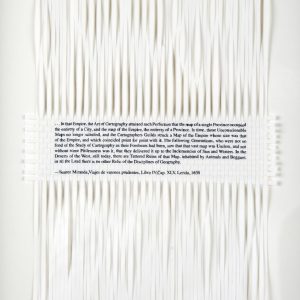