A review by Keely Shinners on the 6th of June 2019. This should take you 4 minutes to read.

The gallery rumbles with the guttural drone of industrial machinery. A matte-black bouncy house — reminiscent of heavy-duty refuse bags – springs to life. Ashley Walters’ Breathe awakens like a sleeping animal, but the animal is trapped, encaged by steel bars on all sides. Its spires get caught between small gaps; its limbs squish into obtuse angles. The motorised blower roars, then goes silent. The apparatus, tired, deflated, crumples to the floor, only to be woken up again minutes later, trapped in an endless loop of attempted escape and defeat.

Walters is known more for photography than sculpture. And yet, Breathe seemed to me an apt metaphor for the photographic pieces in his latest exhibition. Walters is a documentary photographer, but one with an eye for the constricted, the entrapped, the hidden-away. These photos are both documentary and not. The title, White City, comes from the name given by the community of south side Elsies River. The gallery goer might come to anticipate a portrait of this community, an archive of its characters and goings-on. What they get is a documentation of a city in its most minimal, liminal, elusive sense. A photograph like Railway Street offers a nondescript cityscape – a three-way intersection dominated by nondescript, brick-faced buildings – the viewer searches for meaning in more finite details. Looking closer, there’s a figure, cloaked in a blanket, monk-like, rounding the corner. A backdoor is graffitied, “SMITY LOVES MADIEGA 4 EVA.” And, in even smaller script, “$lim$shady vs Chocolate.” There’s a story here, but no context. Walters lures the viewer in with what looks like a film still, but lets the scene remain a mystery. What is it that you came here to look for? What is it you desire to see?

Here’s another example: TV Room, is nothing more than a photograph of an overhead lamp in a red room. And yet, it’s suggestive. It alludes to domestic dramas, erotics, hauntings. But, the domestic life is redacted, leaving the responsibility of narrative to the viewer. The viewer becomes, in a way, embodied in the photograph, lingering on small details – the wire coiled up lazily, the corner of a threshold, the paint peeling off the walls – the same way one does lying in bed at night, insomniatic. 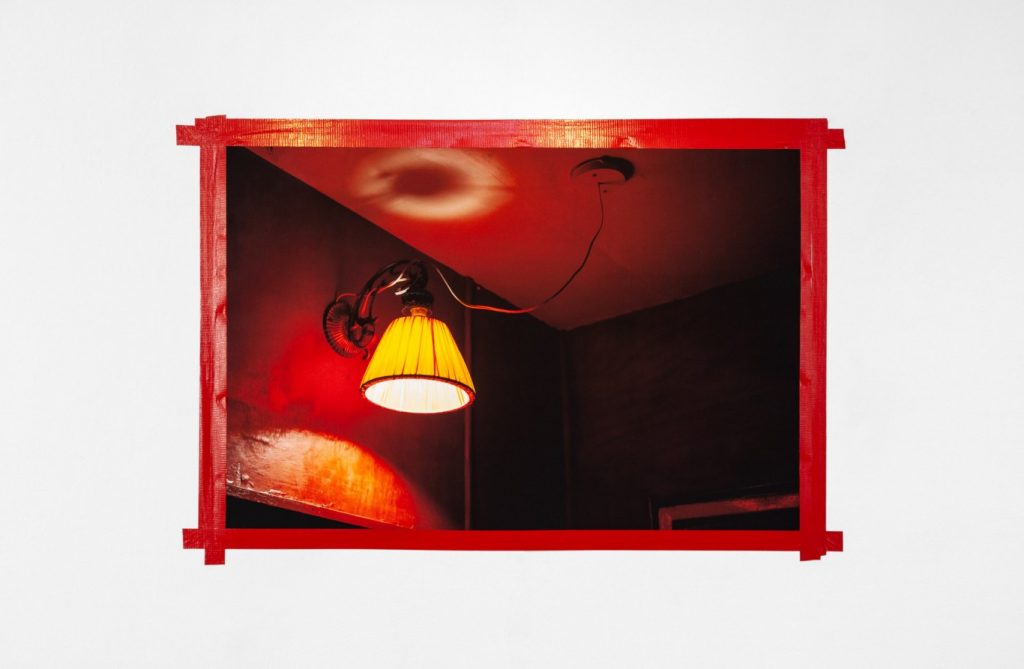 Walters uses his camera as a tool which limits as much as it reveals. I was impressed with pieces that struck this balance beautifully. For others, I wondered, what is accomplished by hiding, evading, confining? What injustice might be done to the subject in the process? Take Gerome for instance. In this image, the subject stands with his back to the viewer, dimly lit by a streetlamp, looking out at the skeleton of a developing luxury apartment block. The composition is beautiful, but the photograph is blurry. The tattoos on the subject’s back seem to tell a story – I can make out the words MPUMA, LANGA, I KILL PEOPLE WILD PEOPLE TOO – but the rest is illegible. I am led to question the integrity of the photo’s context. Was the subject posed, and Walters failed, with insufficient lighting, to take a clear shot? Was this a candid photo? Did the subject know he was being watched, recorded?

Walters’ minimalist eye works well in a work like Junction Hotel. An otherwise pristine white building has been torn into. Bricks lay at the lip of what looks like an open mouth. It’s surgical, organic, mournful. It says something about urban neighbourhoods like Elsies River and their life cycle: development, displacement, dilapidation, redevelopment. Other times, his photographs of pineapple palms and Bowie-eyed huskies, bougainvilleas and back alleys, seem to lack personality, saying little about Elsies River or the community it supports, rendering ‘White City’ a non-place.

Uitsig was the only piece in which community members from Elsies River and surrounds could be identified. The video spliced together clips from sports matches and interiors, street scenes and musical performances. Largely quotidien and sweet, the accompanying score – a dissonant, ambient hum – was a harrowing juxtaposition. I couldn’t quite figure out what this accomplished. Is Walters trying to point out the violence that lurks underneath everyday activities? Why would Walters scrap the sounds of people talking, singing, dancing, and replace it with this melodramatic drone? I began to wonder if Walters’ interest in withdrawal and constraint comes at the expense, sometimes, of his subjects’ opportunities to speak. 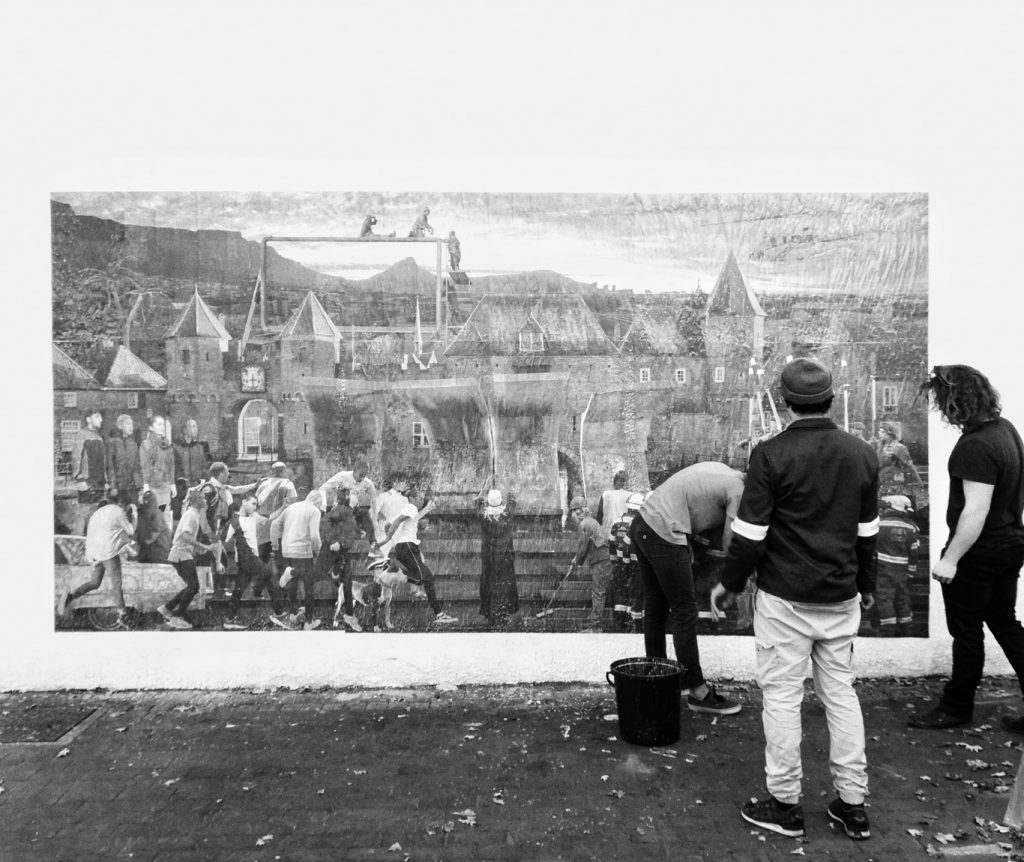 Perhaps I’m biased. I like artworks with a human element, and a sense of morality. Which is why my favourite piece in White City was the one wheat-pasted outside (produced in collaboration with Scott Eric Williams). Moeder Vaderland is a collage, a documentary photograph in a magical realist sense. Its characters are recognizably everyday Capetonians, but the fresco-style makes of them something holy. There are soldiers marching, street sweepers sweeping, kids playing soccer without a ball. There’s a fire brigade, a call to prayer, construction workers remaking the sky. This piece is also trapped. The characters are bound by cement walls and gothic spires from the city centre in the distance, surveilled by a helicopter flying overhead. But they’re choreographed in such a way that imbues them with nobility, a mythicism that renders them as monumental as the mountains just beyond their reach. 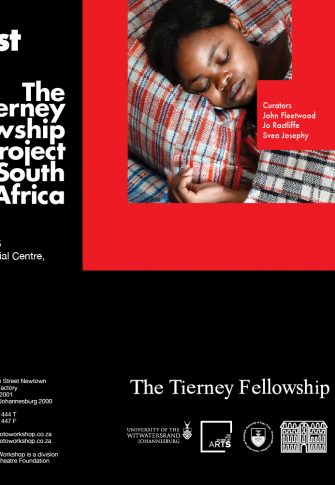 Against Time: The Tierney Fellowship Project in South Africa in Bamako 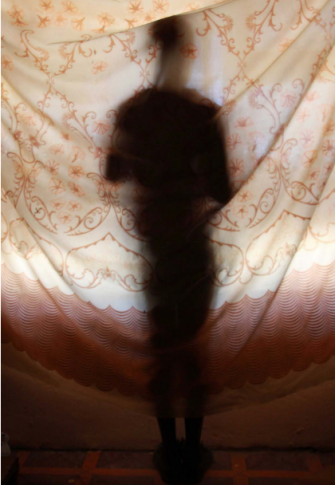 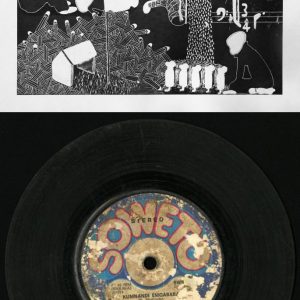