A review by Misha Krynauw on the 14th of May 2020. This should take you 5 minutes to read.

Our mental preoccupation with ‘the future’ has informed stylistic choices that shaped eras of art, fashion and cinema. Yet, the semantics of uncertainty don’t present as poetically when reframed as a presence in our daily routines. Here, in flux between a pandemic and the revolving doors of the human condition, exists still an urge to create and consume. How will this shape the world of art, right here and right now?

Will this pandemic carve out symbols to define the time we’ve all spent indoors, calling us back one day to remember them? Perhaps, though the more immediate effects of our circumstances have forced the art community to reconsider and recalibrate their means of operation. Goodman Gallery proposed a solution: digital viewing rooms.

‘A Golden Spike’ is the name of one of the first two viewing rooms the gallery has launched. Hosting a variety of artists such as Tabita Rezaire, William Kentridge, Pamela Phatsimo Sunstrum, Yinka Shonibare CBE, and Alfredo Jaar, Goodman made use of the open-ended nature that follows the natural inclination of browsing online, marrying it with a myriad of content to peruse. These artists are tied to works ranging from short films, sculptures, photography, and ink throughout this collection. According to Goodman Gallery’s Instagram, the ‘weekly bespoke online viewing rooms’ are part of a selection of efforts on their part to keep audiences locally and in the U.K connected to the art world, specifically theirs.

The gallery presents the collection as an effort to, “[seek] to explore and counter the idea of nature as no more than the backdrop to human affairs. The exhibition takes its cue from the powerful knock-on effect of reduced travel emissions on the environment while over a third of the world population live in lockdown.” Focusing on the effects of our isolation is one aspect of a larger issue that has individualised the environmental plight against crass consumerism while trivialising the role large corporations play. It is a pointed choice to have this be the first offering presented by the gallery, as it brings into question the true form of the human impact on the environment, moulding its shape into the reality of who enacts and benefits the most from the commodification of the natural world. Defining any part of nature with the simple word ‘resource’ already changes our understanding of what that thing, or place, or animal is. This language, when perpetuated by the mechanisms of capitalism, delivers a cyclic blow trapping consumers into compliance. 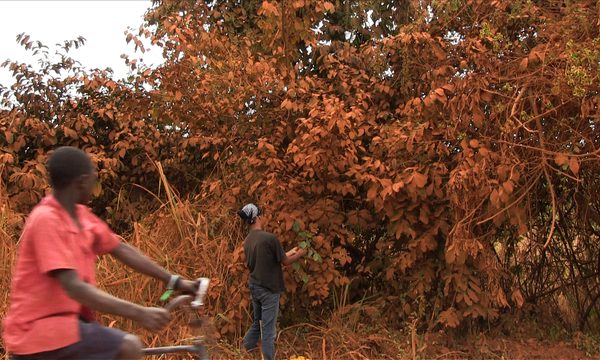 The effects of this – the blatant entrapment and suffering at the hands of decisions made despite the value of natural and human life – and evidence of the harm felt by both are surmised by Kapwani Kiwanga’s Vumbi; sitting at the top of the works curated for the audience in the collection. Vumbi is a short film depicting the power struggles regarding land, onus, obligation, and the actions allegedly made in vain by those adrift in the consequences. There are truths to be derived, realities to be observed, and an important shift in perspective being presented to the viewer.

Moreover, the press release articulates that, “The title of the exhibition refers to the golden spike used by geologists to denote the boundary of a geological time. The anthropocene is seen as a geological epoch when humans significantly impact on the planet, changing it irrecoverably.” It is this thread that permeates the pieces in the collection, each artist offering a different perspective on the matter at hand, and it is left to the audience to navigate the thought-pattern that evolves within this digital space. What was once assumed to be the background of the human experience is begging to be seen for the value it has, value that must be understood in order for us to grasp our role, and the positionality that our sentience prescribes. There is a sense of both urgency and responsibility underlying the themes of the collection, alongside a host of information that encourages the full use of the browsing habits that were dutifully cultivated by social media.

The collection illuminates perspectives from varying stand-points and from various points of our history. Tabita Rezaire’s short film Deep Down Tidal makes the most of this opportunity to bring attention to how human history continues to perpetuate its own archaic systems by denying its foundations/roots. The narrator introduces the concept of ‘electronic colonialism’ by quoting Ziauddin Sardar who, in 1995 said: “The west urgently needs new spaces to conquer…and where they don’t actually exist, they must be created.” In 2018 Rezaire spoke to Rhizome about the project saying, “While researching for the video Deep Down Tidal about transoceanic communication networks, I found out that our fiber optic cables are laid out onto former colonial shipping routes as most still follow the path of 19th-century copper telegraph cables. The internet is literally built on racist social engineering. I was petrified by this symbolism, yet this work brought a deep sense of calm, as water spirits also inhabit our deep seas.” Amidst the ravaging of the environment, the effects of this design often crosses paths with other acts of violence and ignorance, systems  that were put in place to deflect, deny and make money.

In what is arguably our most present period online as South Africans, it seems fitting to juxtapose our outsourcing of human connection –  by being online during this isolation period –  to the effects of the history of human touch itself, beyond our own romanticising. The viewing rooms give the audience an opportunity to connect with works that they may not yet have come across, or works they may not have seen side by side, brought together and held there by the thread that connects us all. This precedent gives the viewer an idea to digest as they go through each piece, and find for themselves the connection to the perspective of the collection as a whole, all at their own pace.